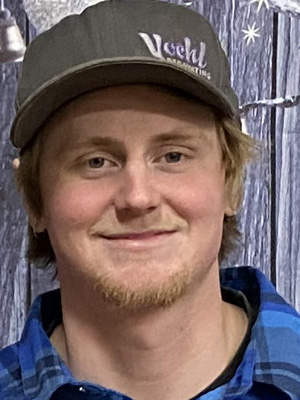 On March 3, 1994, Jerry and Vickie celebrated the birth of their son, Zachary Dean Voehl.  Zakk was an active boy and loved growing up with his three older siblings, Jennie, Darcie & Kyle.  From the time he was a baby, Zakk was always tagging along with his siblings and following in their footsteps.

As a family, they spent a lot of time enjoying the outdoors. Zakk was often tucked under the bow of the boat to enjoy a trip down the river. They enjoyed snowmobiling, riding four wheelers and taking family trips around the United States.  Eventually Jerry and Vickie went their separate ways, but they always remained dedicated parents to their wonderful son.

Jerry and Zakk had that special relationship that only a dad and son can have. They took countless trips snowmobiling in Michigan and out west. His last and most cherished snowmobiling trip was to Canada. Zakk ultimately found his calling when he began working for Jerry’s company (Voehl Excavating) five years ago.  Zakk was a natural when it came to operating big machinery.  He was very talented and such a hard worker. Zakk was promoted to Vice President and planned to take over the company when his dad retired.

His mom Vickie was the nurturer. The older kids knew that Zakk was the baby of the family, and his mom had that special bond with him. She loved her baby boy and he would call her momma. There was a period of time when it was just Vickie and Zakk after the older kids moved out. She will cherish those memories and one-on-one time just being together and doing things like watching the movie The Land Before Time over and over again. They never slowed down and continued traveling and experiencing life together. Vickie was proud of the person that Zakk had become.

There is an age gap between Zakk and his older siblings. They loved having their little brother that they called “Zakky”. It was common to chase Zakk around the house and tickle him while they would take a break from their busy lives as older siblings to play. Zakk looked up to his siblings and clearly learned from them. It is easy to pick out their own unique strengths that Zakk exhibited. He idolized his sister Darcie for being a chinook helicopter pilot. He also learned fishing, agate hunting and his calm demeanor from his sister Darcie. Fearlessness and a love for anything with wheels and power were powerful traits learned from his brother Kyle. Zakk gained a love for adventure, taking trips to experience the world and living life to its fullest from his sister Jennie.

His stepdad Dale “Buck” Gast brought hunting into Zakk’s life. Buck loved experiencing the outdoors with Zakk and was amazed by his stepson’s ability to live life. There was a time when Buck had to argue with a store to replace the bearings on Zakk’s skateboard that were ruined in a short period of time. The store had never seen a person go through bearings so quickly, but that is how Zakk lived!

As a teenager, Zakk began working at Double N Stable in Lakeville.  This is where he met the love of his life, Rachel Lanns.  From the moment they met, they knew they had something special. They had the same interests and hobbies, which led them to do almost everything together. In their free time, Zakk, Rachel and their beautiful black lab Bella enjoyed bowfishing, ice fishing, four wheeling, surfing, boating, hunting, exploring and agate hunting. One of Zakk’s happiest moments hunting was when he got a Pintail. Zakk was a good provider and was so proud of the beautiful 28-acre property he shared with Rachel that had its own private lake where they planned on building their dream home. While on the job working, Zakk had a knack for taking old, discarded items and giving them a new life. He would find special items and plants for Rachel which added a special touch to their property. Their love continued to grow and for the past 11 years, they had built a beautiful life together.

Zakk was also a bit of a motorhead and loved speed.  He enjoyed snowmobiling, four wheeling and riding his crotch rocket.  It was said he was always happy when he had a pair of handlebars in his hands.  He quickly went from a regular old bicycle, to a minibike, to a dirt bike, to a crotch rocket.  Soon enough he was enjoying life riding down the highway at full speed.  Zakk always lived his life at 100 mph at 150%.  He was a bit of an adrenaline junkie which caused him to have 7 broken bones in just 8 years.

There were many friends and family in Zakk’s life. He shared his love of cars, boating and four wheeling with friends. A close bond was formed with his uncle Darcy and cousin Brody. Zakk became the “cool uncle” to his five nephews. It was common to see Zakk with a smile chasing his nephews at family gatherings so he could tickle them, similar to how his older siblings would chase him. His nephews would watch in awe when Zakk would invite them to watch him operate equipment.

There were some difficulties in Zakk’s life. He suffered a heart attack when he was 23 years old.  On March 3, 2021, Zakk died much too soon on his 27th birthday.  His family takes comfort knowing that he is now at peace and that his legacy will live on in their hearts forever.

Offer Condolence for the family of Zachary “Zakk” Voehl