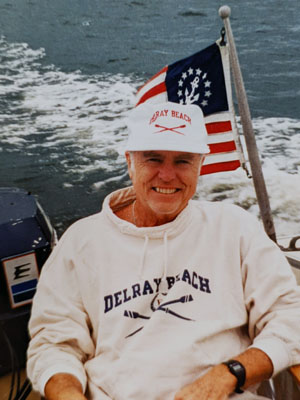 A visitation will be held on Tuesday, November 29, 2022 from 4-7PM, at Ballard-Sunder Funeral Home, 4565 Pleasant Street SE, Prior Lake. A Mass of Christian Burial will be held Wednesday, November 30, 2022 at 11AM with visitation from 10-10:45AM at St. Michael Catholic Church, 16400 Duluth Avenue SE, Prior Lake. Father Tom Walker will preside. Bill will be laid to rest at St. Michael Catholic Cemetery with military honors provided by the Prior Lake VFW Honor Guard.

Live Streaming available at St. Michael Catholic Church’s website https://stmichael-pl.org and by clicking on the “Mass and Services” tab.

Bill was born January 7, 1925 to parents Gerald and Josephine (Bowers) Koness in the Bay Ridge Neighborhood of Brooklyn, NY. He grew up in Wantagh, Long Island and later graduated high school in Freeport, Long Island. Furthering his education, Bill earned a degree in mechanical engineering after attending Villanova and Columbia University, PA.

During World War II, Bill served as a Lieutenant Junior Grade officer with the U.S. Navy. He was stationed at Manila Bay in the Philippines on the Y.M.A 68 Ship. Upon his honorable discharge, Bill returned to the United States and entered the workforce. He was a sales representative for 25 years with Taylor Fibre and 5 years with 3M. An industrious man, Bill founded his own company Faith Sales and worked independently for approximately 25 years.

From 1987 until 1999, Bill worked for Catholic Charities in refugee resettlement. He cherished his work and helped many, many refugees achieve their dreams. Some six hundred Vietnamese, Cambodian, Laotian, and others will always remember Bill for his expertise and kindness. From 2000 until 2005, Bill assisted Memorial Blood delivering blood to various hospitals.

In his free time, Bill enjoyed many hobbies. Whether it was hiking in the woods, swimming, or reading, Bill always looked and acted much younger than his years. He was a skilled woodworker and carved many canes, walking sticks, and crosses.

Bill truly had a servant’s heart—he took every opportunity to volunteer! He served as a Deacon in the Catholic Church from approximately 1977-1989. Living his faith daily, Bill helped with prison ministry, Amicus, Rosaries for Life, Meals on Wheels, Loaves and Fishes, Listening House, driving and making delivers for the elderly, and assisting at the front desk at St. Francis Hospital in Shakopee. Bill was also a member of the Knights of Columbus and served as a Hospital Chaplin and Eucharistic Minister.

Always motivated to help others, Bill accomplished missionary work throughout the world—Guatemala, Mexico, Ireland, the Philippines, Africa, and beyond. He tirelessly aided organizations such as Global Volunteers, Maryknoll, and the Christian Foundation for Children & Aging.

An extraordinary man of faith, Bill enjoyed life and found ways to help the poor. Steadfast in his faith, he attended daily mass and prayed the Liturgy of the Hours and Scripture daily. Bill will be remembered fondly for his positive attitude and character as he was a true example of integrity.

Bill is preceded in death by his parents; brother, Bob (Delores) Koness.

Offer Condolence for the family of William “Bill” Koness