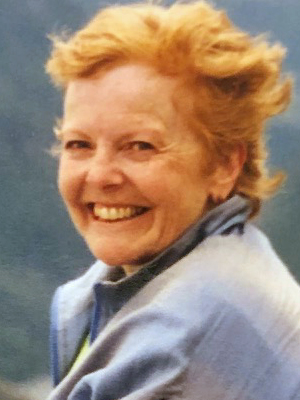 Ruthe Tollefson Enstad, age 75, of Prior Lake, MN, passed away on October 15, 2020 with husband John beside her after a 6-year battle with Alzheimer’s Disease, at New Perspectives Assisted Living, Prior Lake. She was a loving wife, mother, grandmother, and amazing friend.

A time of gathering will be held Monday, October 26, 2020, from 4-6PM and on Tuesday, October 27, 2020 from 10-11AM, with a Celebration of Life at 11AM, all at Ballard-Sunder Funeral and Cremation, 4565 Pleasant Street SE, Prior Lake. Ruthe will be laid to rest at Spring Lake Cemetery in Prior Lake. Memorials are preferred and will be distributed to charities in Ruthe’s memory by her family.

Ruthe was born in Starbuck, MN on October 18, 1944, to Alfred and Ruby (Olson) Tollefson. She graduated as the salutatorian from her Class of 1962 and then attended Concordia College, in Moorhead, MN for one year. After a Rheumatic fever disease detour, Ruthe transferred to Fairview Nursing, then Augsburg University, in Minneapolis, MN on a journey to be interrupted for a few years after meeting John Enstad at Augsburg. They married on March 4, 1967, at East Zion Lutheran Church, in Starbuck, MN. Three sons, Michael, Jason, and Andrew were raised and during those years, along with John, helped launched the Lutheran Marriage Encounter program in Minnesota, including presenting and hosting multiple weekends. As the child raising phase matured, Ruthe resumed her academic studies at Australian National University, in Canberra, Australia. Upon returning to the USA, she completed her undergraduate BA requirements at Metro State University and a Master of Arts in Woman Studies at Minnesota State University, in Mankato, in 1990. As part of the adjunct faculty, Ruthe taught Woman’s Studies at Minnesota State University in Mankato for seven years.

In addition to her academics, Ruthe did massages, had a house cleaning business and did lots of artistic projects. She was also involved at Shepherd of the Lake Lutheran Church (SOLLC), by singing in the choir for years and started a woman’s support group for woman at SOLLC, who had similar views on life as Ruthe.

A tandem bicycle was purchased in 2000 and over the next 13 years, with Ruthe as stoker, the team averaged close to 2000 miles per year, including a Wisconsin SAGBRAW ride, a Minnesota TRAM ride, 2 Cheese Country rides in Wisconsin, 7 Biking Around Minnesota rides (BAM), 10 RAGBRAI rides across Iowa and numerous other bike rides around the country. In addition to the athletic activities, Ruthe has been an enthusiastic grandmother to her grandchildren and attending lots of dance recitals, piano recitals, band concerts, hockey matches, basketball games and baseball/softball games over the years. Alzheimer’s robbed us of Ruthe’s amazing mind and magic in recent years, but memories are forever, and we will never forget her incredible smile and laugh.

With retirement, Ruthe was the cheerleader for international travel. Ruthe and John traveled to Germany in 2010 for Oberammergau Passion Play, traveled to Israel in 2012 and multiple cruises to Alaska, Caribbean, Spain, Italy, and France. In 2014, travels took Ruthe and John to Prague, CZ, for an international choir festival as part of the MN Oratorio Society and also returned to Australia, Norway and other Scandinavian countries multiple times.

Offer Condolence for the family of Ruthe Tollefson Enstad