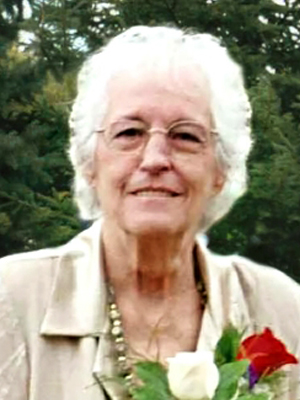 A visitation will be held on Sunday, June 20, 2021 from 4-6 PM and Monday, June 21, 2021 from 10-10:45 AM, followed by a Celebration of Life, at 11 AM, all at Ballard-Sunder Funeral & Cremation, 4565 Pleasant Street SE, Prior Lake. Pastor Diana Hunstad will preside. Pall bearers will be Bob Boegeman, Brad Borchardt, Tim Hauser, Billy Borchardt, Jacob Hauser, and Nick Hauser. Honorary bearers will be Annie Waxvik, Kilena Edwardson, Jenna Gray, Kali Boegeman, and Kirsten Vanderlip. Burial will be at Fort Snelling National Cemetery on Thursday, June 24, 2021 at 11:30 AM.

In Lisbon, ND, parents Harold and Emma (Freeberg) Wells announced the birth of Marlys Eleanore on February 23, 1933. The eighth of ten children, she grew up most of her years in New Brighton, MN. Marlys often referred to herself as the Black Sheep of the family and Tomboy. She was the tallest of the daughters, dark complected and loved being outdoors. After completing the eleventh grade, Marlys entered the work force. She enjoyed the days driving with her dad to work at Singer Sewing Machine.

Unbeknown to Marlys, her life changed while attending a dance. From across the way, a young gentleman named, Arnold R. Seibert cast his eye upon her and intuitively knew they would wed. On September 5, 1953, in New Brighton, Marlys and Arnold tied the knot. It was 9 months later, she became a mother to Keith, with daughters, Cindy, Penny and Pam to follow. Marlys devoted her life as a mother, but also as an extended mother to whomever entered her home.

The Seibert family eventually settled down in Prior Lake in 1970. Marlys’ door was always open. Her home became the gathering place for friends and family. Marlys and her family relished the vacations to Kurtz Resort, with Arnold’s side of the family. Marlys also had a gift of merging both sides (her family with Arnold’s family), that for decades the younger children thought they were all one big happy family!

After the children grew up, Marlys reentered the work force cleaning homes and working for Pouliot Designs. In 1980, she took her cooking expertise working for Cindy at the Hollywood Inn. After retiring, Marlys could not sit idle, accepting a part time position as a cook at the St. Patrick’s Tavern and Restaurant. Life was the richest as Marlys became a grandma and great grandma. She loved watching them, especially planning special events on holidays just for them. Marlys enjoyed teaching them to play Cribbage and Poker and being active in their lives.

Marlys loved polka dancing, bowling, and taking an active role as the clubs bowling secretary. She was an avid Minnesota Vikings and Twins fan. Marlys enjoyed spending Mondays with Pam at the casino, shopping, going out to eat or seeing a movie. She especially enjoyed the annual Christmas shopping excursion with her daughters and adopted daughter, Donna. And the birthday dinners with all the girls in the Seibert family, of all ages.

Offer Condolence for the family of Marlys (Wells) Seibert