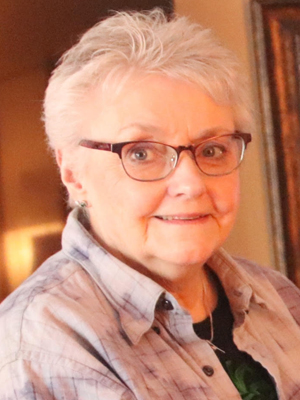 A Christian Funeral will be held Friday, December 31, at 12 (noon) pm, with a visitation from 10 – 11:45 am, both at Immanuel Lutheran on Fish Lake, 20200 Fairlawn Avenue, Prior Lake. Dr. Rev. Brent Parrish will preside. Marilyn will be laid to rest at Spring Lake Cemetery, in Prior Lake. Memorials are strongly encouraged in memory of Marilyn to Immanuel Lutheran Church on Fish Lake, due to family flower allergies.

Marilyn Eleanore was born on September 27, 1943, to William “Bill” and Ida (Mueller) Klingberg. She was the third of six children. Marilyn grew up working hard on the family farm in rural Prior Lake, alongside her siblings, William, Eugene, Linda, Gale and Cynthia. While attending high school, Marilyn was one of the first Lakerettes. She was a proud graduate of the Prior Lake High School Class of 1961.

Unbeknown to Marilyn, she met the man of her dreams sitting beside Spring Lake Road, with some friends. A young man named Richard Edward Kes pulled up with his car. A conversation started and the love story began. On October 13, 1962, they wedded at the old downtown St. Paul’s Lutheran Church, in Prior Lake. Marilyn and Richard danced the night away in the machine shed at the Klingberg farm. They were blessed with two precious children, Richard and Kimberly. The Kes family always called Prior Lake their home. In 1970, Marilyn and Richard were gifted a parcel of land on the Klingberg farm, to build their forever home on Ida Circle (named after her mother.)

In her earlier years, Marilyn attended beauty school, but never pursued a career in Cosmetology. Instead, she spent most of her years working for various companies in customer service, Murphy’s Landing, Aero Drapery, Window Wares, Continental Machines and Hitchcock Industries.

Most important in Marilyn’s life was first and foremost her faith, followed by her family and friends. Marilyn had a very strong faith, which she passed on to her children. Marilyn was always involved in church life. As a young family, the Kes’s relished summer vacations renting a cabin, where they enjoyed fishing and being surrounded by relatives. In 1977, Marilyn and her family were fortunate to take an extended vacation traveling west to California. Marilyn oversaw the map books routing them to Disneyland and the ocean. In later years, she, her family and extended friends enjoyed 18 years of “glamping” or seasonal camping at Timberline Campground, in Sturgeon Lake. Marilyn looked forward to Saturday mornings to go into town to shop, have lunch and coffee, with Kim and close friend Janet. The Kes’s biggest adventure was an Alaska cruise for their 50th wedding anniversary.

Being a grandma to grandson, Rycky was Marilyn’s everything! She was so proud and looked forward to spending Sunday afternoons with him. Marilyn enjoyed the adventures in places and people. She liked attending polka festivals and dancing with Richard. They loved traveling to Alaska and Hawaii. She had many great adventures also traveling with Kim. Marilyn enjoyed crafting, shopping with coupons in hopes of finding a great deal in stores and later online. She was the master of her mother’s Chicken Dumpling Soup and canning from the garden. Christmas Eve was Marilyn’s biggest delight being surrounded by family. She enjoyed going out to eat and the occasional visit to the casino in hopes of winning it big.

Offer Condolence for the family of Marilyn (Klingberg) Kes