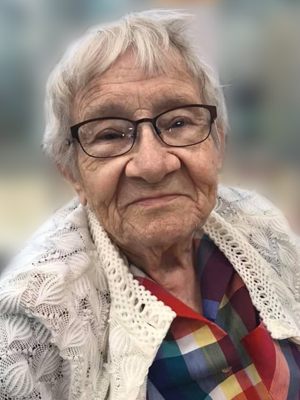 Lil Bastyr, longtime resident of Jordan, passed away on Thursday, December 5, 2019 at the age of 86. A graveside service will be held this coming spring. She will be laid to rest with her late husband Maynard.

On July 3, 1933, Lil was born to parents Joe and Ella (Tuma) Katra in Montgomery. In her youth, Lil met Maynard Bastyr. After six years of courtship, they exchanged wedding vows on July 9, 1955 in Montgomery. This union was blessed with two children and 62 years together.

Lil was an exceptional homemaker and cared greatly for her family. She was known for her baking, especially her pies. In her free time, Lil enjoyed hosting and attending garage sales.

Throughout her life, Lil was a strong willed and independent woman. She will be missed by sons, Joe (Diane) Bastyr and James (Deb) Bastyr; grandchildren, Nathan (Kim) Bastyr, Nicholas Bastyr, Jason (Lisa) Rudoy; great-grandchildren, Noah Bastyr, Ethan and Cody Rudoy; many other relatives, and friends.

Lil is preceded in death by her husband, Maynard, and her parents.

Offer Condolence for the family of Lil Bastyr