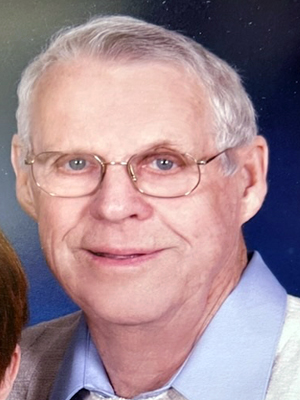 A visitation will be held on Thursday, September 29, from 4-7PM, at Ballard-Sunder Funeral & Cremation, 4565 Pleasant St SE, Prior Lake. A Mass of Christian Burial will be held on Friday, September 30, at 11AM, with a visitation from 10-10:45AM at St. Michael Catholic Church, 16400 Duluth Ave SE, Prior Lake. Jerry will be laid to rest at Credit River Cemetery with Father Tom Walker presiding. Pallbearers will be Bob McNearney, Tim McNearney, Rob Casey, Kevin Casey, Greg Klingberg and Glen Klingberg.

Livestreaming will be available at St. Michael Catholic Church’s website https://stmichael-pl.org/ and by clicking on the “Mass and Services” tab.

On March 5, 1935, in Minneapolis, MN, parents Frank and Catherine (Lyons) Roach celebrated the birth of their son, Jerome Michael. The youngest of their three sons, he was raised on the family farm near Fish Lake. In his youth, Jerry loved playing basketball, baseball, and football. His interest in sports continued throughout life—he never missed his grandson’s hockey games or watching the Vikings, Wild, or Twins! Jerry was an avid supporter of the St. Patrick’s baseball team, as well as Prior Lake High School football and baseball.

Jerry attended school in Jordan through the Eleventh Grade, until the Prior Lake High School was built. He was a proud graduate of Prior Lake High School’s first graduating class! Following his graduation, Jerry continued working on the family farm. In addition to farm work, he drove School Bus #9, in the Prior Lake area for twenty years. An easy going and sociable man, Jerry greeted the students with a smile every day. Eventually, he began a job at the K-Mart Warehouse in Shakopee. After retiring in 1994, Jerry just couldn’t stop working! He soon began driving for Anderson Bus Service.

While dancing at the Spring Lake Ballroom, Jerry caught the eye of a farm girl from Eagan, Lorraine Slater. On June 8, 1957, they were united in marriage at St. Theresa’s Catholic Church, in St. Paul. They were blessed with 65 years together. Jerry and Lorraine instilled important values in their four children—pray often, work hard, and stay focused on family.

Often Jerry and Lorraine would load up the children in their car and hit the road. They camped at many national and state parks. Wherever they traveled, Jerry would find a local catholic church so they wouldn’t miss Mass.

In his free time, Jerry enjoyed watching the wildlife on the farm, as well as driving around the country after Sunday Mass. He enjoyed visits from his brother Father Francis, when they would play cards or watch a game on television. Jerry and Lorraine also traveled throughout the United States, visiting places like Alaska with exceptional wilderness and scenery. A proud Irishman, he also took numerous trips to Ireland, where Jerry explored family history and met distant relatives.

Jerry’s abiding faith guided him in life. In moments of happiness and difficulty, he placed his trust in God. When Jerry needed a kidney transplant, he went to church and asked for an announcement to be placed in the church bulletin. His call was soon answered. A fellow St. Michael’s parishioner had reached out. Their generosity allowed for a life extending transplant. Jerry lived every day with gratitude and appreciation for the kindness of strangers.

Jerry is greeted in Heaven by his parents, Frank and Catherine; brothers, Father Francis J. Roach and James Roach.

Offer Condolence for the family of Jerry Roach