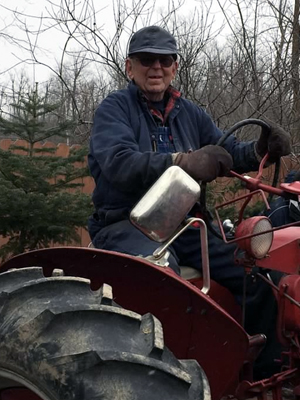 A Mass of Christian Burial will be held on Tuesday, July 12, at 11 am, with a time of gathering from 9:30-10:45 am, at St. John the Baptist, 313 Second Street East, Jordan. Friends may also join via live streaming at http://sjbjordan.org and click on the livestream tab. Father Neil Bakker will preside and grandchildren Emily and Tucker acting as urn and flag bearers. Jim will be laid to rest at St. John Calvary Cemetery, with a luncheon at St. John’s following the burial.

On October 25, 1931, in Tyrone Township, in Le Sueur, MN, Jim was born to Thomas and Louise (Manke) Luskey. As one of 10 kids, Jim and his siblings grew up helping on the family farm in Le Sueur. At the age of 18, Jim followed in his father’s footsteps and enlisted into the United States Air Force. He proudly served 4 years during the Korean War, where he specialized in aircraft hydraulics. After Jim’s active duty was completed, he served his country in the Reserves and later as a member of the Jordan Honor Guard. His father, who served in WWI, was proud of all his sons serving in the military.

While in the service, Jim met the first love of his life Helen LeClaire. They were married on August 26, 1955. Jim and Helen moved back to Minnesota and were blessed with five children, before she passed in 1971. He found love again, with Elizabeth “Betty” Miller and her 4 children. They were married on January 24, 1975. Jim and Betty spent the next 44 years making memories as a blended family, before she passed in 2019.

Jim passed his work ethic and love of machinery and engines onto his boys. Jim would have the boys help him in the shop. When Jim became a grandfather and great grandfather, he loved to let his grandkids drive his tractors. He didn’t ride with them, instead, he allowed them to drive around the neighborhood.

In 1965, Jim and Helen founded Jim’s Garage, in Jordan. Here, he continued his love of engines and machinery. If you worked there, you’d better enjoy listening to polka music. After retirement, Jim and Betty moved to God’s County, aka “up north.” He was happiest being in God’s Country, tinkering with his garden tractors and fishing with his grandkids or anyone else for that matter.

Offer Condolence for the family of James “Jim” Luskey