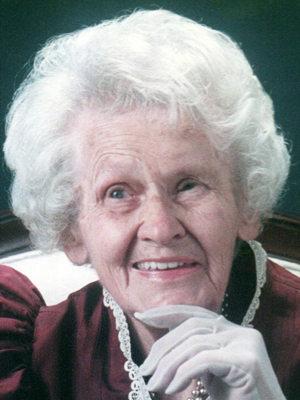 Gail was born on May 4th 1918 in Glencoe Illinois to Arthur and Eleanor Johnson. Gail graduated from the University of MN in with a degree in English. She married her first husband Lester Bakken on 10-5-1940. Upon moving to Brooklyn Park MN, Gail and Les designed and hand built their home along the Mississippi River and raised their 2 children Sally and Bruce. Gail loved to travel and go on family boating trips. During her years in Brooklyn Park, Gail served as the City Clerk and wrote several articles for the newspapers, Popular Mechanics, Mexico World and Outboard magazines.
In 1971 Gail Andersen moved to Jordan. She lived in the country for many years and then purchased and lived in the Nicolin Mansion with her mother, Eleanor Johnson, for several years. Gail is known in Jordan for renovating the historic Brewery Building, putting several structures on the National Register of Historic Places, Grandma’s Attic antique store, compiling 2 book volumes on Jordan’s history, and being the first female Mayor.

Offer Condolence for the family of Gail Andersen