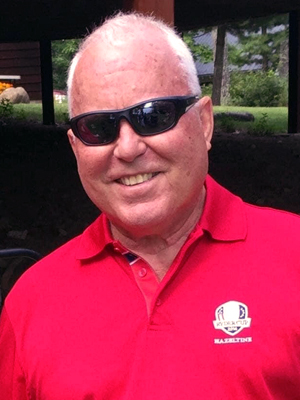 A Celebration of Life will be held Tuesday, June 28th. Visitation will start at 10 AM, followed by a church service at 11 AM, at St. John the Baptist Catholic Church, 313 East Second Street, Jordan. Father Neil Bakker will preside. Following the church service there will be a Celebration of Life at Ridges at Sand Creek Golf Course at noon. In lieu of flowers, consider buying a bottle of Windsor and holding a glass high, preferably with a Windsor Old Fashioned (with olives!), in honor of Doug, and let a memory bring a smile to your face!

Doug was born in Black River Falls, WI, before moving to California at age 3 and returning to Humbird, WI before his Jr. year of high school. He met Lorene Smith and they dated prior to him being deployed to Vietnam where he served on a Mine Sweeper, the USS Fortify, in the U.S. Navy. Upon his return, Doug & Lorene married on June 10, 1967. Doug worked for Ed Phillips & Sons for 41 years. He loved his job and met some amazing friends. He was proud of his many accomplishments and trips he won throughout the years, but most importantly, the relationships he developed along the way. Doug was very active in his children’s lives, not missing an activity or event. When they were young, he was at every game, concert, and volunteered to work school events, usually arriving before maintenance opened the door. As a result, he also became very close to many of his children’s friends and enjoyed catching up on their lives journey’s as well. He enjoyed spending time and helping his children up until his final hour and you would always hear him beam with pride when talking about them, the things they were doing, and the time they spent together (which was often).

The ultimate joy of his life was his three grandchildren. He exploded with pride and love when they were around and was so proud of them and everything they did. Like with his children, he continued to attend every sport and activity they were involved in and eventually moved to Jordan, MN to be closer to them and ensure he did not miss a thing. He had an amazing bond with all three and they looked forward to him being at their events, serving lunch at school, or just dropping by for a quick chat (usually about sports or what was going on in their life) and a treat (usually ice cream or donuts). He was also an amazing “cookie tester” when Lorene and Kyra would bake. He enjoyed being able to share his love of Wisconsin sports by taking all three grandkids to Lambeau Field for Packer games with his season tickets that he waited 30+ years for, just to have that exact experience. All three will have their biggest fan and supporter watching over them!

Doug valued his friendships creating a close circle of friends in both Eau Claire and Jordan that he enjoyed spending frequent time with and endless laughs! Whether it was a Friday Night Fish Fry, steak dinner at home, or an adventure/trip; he liked spending time with friends! The last 10 years his favorite place was Webb Lake, WI where he enjoyed spending time with family and friends and meeting another circle of amazing friends that he couldn’t wait to see when he got up there. Doug loved his extended family and family events, never seeing them nearly as much as he would have liked, but when he was with them, he enjoyed every minute, always giving a “speech” (although not always appropriate) or leading a march, or just joining in the games, stories and laughter. Everyone will always remember his big smile, huge laugh and beaming blue eyes!

Doug will be forever missed, but never forgotten, by his wife of 55 years, Lorene; children, Casandra “Candy” and DJ; Grandsons, Kade and Seth; granddaughter, Kyra; brother, Ed Noyes; sister, Beverly “Roxie” Noyes; and many, many, other relatives and friends. He is preceded in death by his parents, Edmund and Geraldine, and sister, Barb Buonauro.

Offer Condolence for the family of Doug Noyes