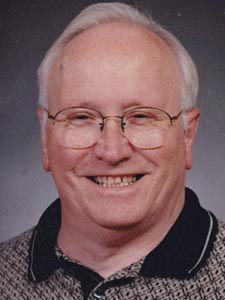 Don David Taylor died at his home with his beloved wife Pam and son Nick at his side on Monday, October 5, 2020 at the age of 80. Don was a soft spoken, kind and gentle man who always was respectful and supportive of others. He will be deeply missed by his family and friends.

Please note, this service will be a Parking Lot Worship Service. After greeting the family, those attending can remain in their vehicles and listen to the service broadcast at 106.5FM (transmission range is within a half mile of church). Following the service, Don will be laid to rest at Concord Hill Cemetery, Lydia. Pastor Mark Chapman will preside.

Don David was born May 23, 1940 on the family farm in Belle Plaine Township to Sylvan Ivan Taylor and Ruth Marie Taylor, nee Snyder. Don was the youngest of four brothers and grew up being the “baby” of the family. Don and his nearest brother Dick were always the greatest of friends, but Don also grew up being bossed around by Dick and his other brothers.

Don was confirmed in the Lutheran Church.

Don attended country school Dist. 35 until 7th grade. He enjoyed the small setting of country school and always described himself as shy as a child. Transferring to Belle Plaine High School for 8th grade was initially traumatic for Don. He soon made friends with Kenny Farrell, who would be his best friend for life. His graduating class in 1958 was a close group and has maintained connection through well attended class reunions, the last of which Don attended in 2019.

Childhood on the farm was filled with chores and playing with brothers and neighbor boys, including Ed “Butch” Bowler. Guns, particularly antique guns, were a frequent play thing resulting in many family stories of holes blown in doors, floors, toilets, and the sometimes the guns themselves blowing up. As they got older cars became a centerpiece of activity. Restoring old and inoperable cars took up a lot of time. Don loved to dance and to roller skate and many a weekend evening would be spent dancing to “Old Time” music. Don was active in 4-H all his eligible years and got his final ring when he was 21. While in 4-H he was able to attend “Farm Boys Camp” at the Minnesota State Fair for two sessions. The attendees acted as ushers at fair events and lived in a dormitory on the fairgrounds; generally just 8 days of fun! He exhibited at the county and state fair getting many blue and grand champion ribbons. He also was active in Future Farmers of America through high school and was fortunate to get a scholarship to the University of Minnesota School of Agriculture St. Paul Campus; a 2 year program from which he graduated in 1960.

Don was always interested in the family farm and his goal was to take over his Dad’s and his Uncle George’s farms as they retired. This plan took a sharp detour on July 4, 1961. When driving with his friend Kenny by Prior Lake he lost control in some loose gravel and turned upside down in the ditch. A relatively minor accident that left him with a fractured vertebrae in his neck and life long quadriplegia.

Don spent a year at Sister Kenny Institute and when discharged returned to the farm. His mother, dad and sister-in law Shirley Taylor all helped with his care. Don attempted to manage the farm with hired help but did not find this workable. With his mother’s encouragement he took a correspondence art school course and soon was enjoying painting including developing a Christmas Card business. He regularly entered his artwork in the Sister Kenny International Art Show and frequently had a painting in the annual Sister Kenny Calendar. He attended Camp Courage, got his HAM radio license, his own amateur radio, and was active in HandiHams. Locally he joined the Belle Plaine Jaycees. He also was interested in his family history of the Taylors, Habeggers, Leibrands and Bieders families.

In 1976 Courage Residence was built to assist the disabled in obtaining an education, independent living and employment. With the possibility of becoming independent Don moved to Courage Center in the summer of 1976 as one of the first residents. While at Courage he began a two year business degree at Normandale Community College. At this time, through a mutual friend, he met Pam Killian. With a mutual interest in the same family histories they soon became friends. Friends developed into a romantic interest. When Don left Courage Center and got an apartment near Normandale College only blocks from Pam. Following graduation from Normandale in 1980 Don enrolled in Mankato State extended campus and completed his degree in Business Administration in 1992. In 1981 Don and Pam decided to join forces and built their house in Bloomington at 9950 Grand Ave. S. where they have resided until Don’s death. Don designed the house to his needs on a lot with a country atmosphere in the middle of Bloomington. He enjoyed the outdoors at his home with wildlife including deer, turkeys, fox, hawks and pesky racoons.

When Don graduated from Mankato State in 1983 the country was in the midst of a recession and jobs were hard to find. He was lucky enough to be employed by the Veteran’s Administration Hospital in their patient travel department where he managed a large budget, set up travel between Veteran’s facilities and to brought eligible veterans in for treatment. Don loved his job and the friends he made at the VA. He retired after 19+ years in 2002.

Being employed opened other opportunities and Don and Pam married in August 1983. Their son Nick was born in 1984 and their son Yuri adopted in 1993. Don enjoyed being a father and could always be found rooting on the boys from the sidelines in soccer, baseball and hockey.

Don and Pam enjoyed camping around the region. Making trips in their adapted van, later a trailer and later still camping cabins. Genealogy trips were made to Illinois, Wisconsin, Pennsylvania and Ontario with a scenic stop at Niagara Falls. Other trips were made to Mount Rushmore, Wisconsin Dells, and Thunder Bay. Their favorite campgrounds were at Sylvan Park in Lanesboro and Gunflint Pines. When travel got too difficult in 2005 they built an accessible cabin near Lanesboro in the middle of Bluff Country. Year round trips to the cabin were made for enjoying many campfires, moon rises and shooting stars. Don always loved trees and was excited to own his own grove of Black Walnut trees.

Don was always able to make his life active and valuable no matter his physical limitation. He had many interests including genealogy, painting, Ham radio, antique guns & muzzleloaders, remote control airplanes, playing cards and later computer Freecell. He spent many hours at the basement workbench building sail planes and gun stocks. The computer and internet opened up a new accessible world for family history. He was very active on Ancestry.com and has over 130,000 entries on his family tree. Quicken allowed him to control the family finances. As his abilities changed with age he just adapted what he was working on to something new he could do.

Don enjoyed his sons Nick and Yuri and Yuri’s son Alex and step daughter Destiny. He mourned his son Yuri’s death the past May. Don’s health declined after Yuri’s death. He made his last post on Facebook and entry on his family tree the end of June. Don participated in the “Longevity after Injury Project” and is one of only a few people in the country surviving over 50 years after a spinal cord injury. Don survived 59 years after his injury.

We thank those who assisted in Don’s care the last couple of years and Allina Health Hospice. A special thank you to Katie Hedquist, Greg Jackson, and Mary Kibiro for their help and friendship.

Don will live forever in all the entries in Ancestry for other people to use to trace their family trees. Hopefully now in heaven he can finally find out with certainty who the father of his 18th century ancestor, George Taylor, actually was. We live as long as someone remembers our name.

Don has completed his journey on earth but will continue in our hearts. May God give him rest.

Offer Condolence for the family of Don David Taylor