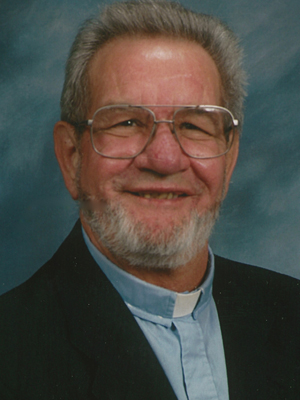 Deacon Allan A. Schroeder, age 82, formerly of Shakopee, MN, entered eternal peace on Ash Wednesday, March 6, 2019, at his daughter’s home in Brainerd, MN. The night before he passed, Deacon Al expressed what a gift Ash Wednesday is in our lives. It is a day of salvation and what a blessing, it would be if he could go home on this special day. With receiving the Eucharist just moments before, Deacon Al smiled and peacefully was welcomed home by his Lord and Savior.

A Mass of Christian Burial will be on Tuesday, March 19, at 11 am, with a time of gathering starting at 9:30 am, all at the Church of St. Mark (The Parish of Saints Joachim and Anne) 350 Atwood Street South, Shakopee. Deacon Al will be laid to rest with his beloved wife at the Shakopee Catholic Cemetery, with military honors provided by the Shakopee Veterans Honor Guard.

Back in the day, the Mohrbacher’s and Willems’ families founded and established businesses in the small rural town of Cologne, MN.  It was in this same town, Allan Anthony was born on December 23, 1937, to parents Herbert and Armella (Willems) Schroeder. The second of five children, Al has many fond memories growing up with siblings, William, Charles, Diane and Ruth Ann. Life for Al was simple. He enjoyed the simple pleasures of growing up above his Grandpa’s bar, which allowed him to visit, at any time. At the age of 12, Al recalls becoming his own man. He began working for pay on the relative’s farms and at other various jobs. One unique endeavor was working as a bee keeper.

Al graduated from Norwood High School in 1955. He enlisted in the United States Navy, where he proudly served for 4 years. Life for Al became enriched when he met his soul mate, Eve Claire Mercure, through mutual friends. It was love at first sight for them!  With God present in their lives, Al and Eve married on August 20, 1960, at Our Lady of the Sacred Heart, in Springfield, MA.  From this union, they welcomed four precious children, Catherine, Michael, Deborah and Karen. First living in Florida, Al moved his family back to Cologne in 1963 and to Shakopee in 1976. In 1988, he and Eve moved to Chaska and then back to Shakopee. Al also lived in Pleasanton, TX and spent the last 3 years in Brainerd, with his daughter, Deborah.

Al was a gifted man, who could do most anything. His career spanned as a milkman, welder, plumber and electrician. Al spent most of his profession working at Rahr Malting as a plant engineer for 30 plus years. He was dedicated to his work and family, sometimes working three jobs, to assure they were being taken care of.  Al’s greatest accomplishment was being able to serve God. He was ordained a Deacon in 1993, serving as the first full time Deacon in the Archdiocese to parishes in Waconia, Shakopee and Victoria.

Deacon Al had many passions. Through the years, he enjoyed fishing, frying them up and sharing the blessings with others. Saturday’s were always special times with his children, swimming, riding motorcycles, and having intimate conversations. Deacon Al’s life was once again enriched becoming a grandpa and great-grandpa. He and Eve spoiled them, with endless bowls of ice cream and candy. Each one had their own special connection and relationship with grandpa. Deacon Al enjoyed spending winters in Virginia with his son and family too.

From a little boy on, Deacon Al opened his life to God. It was Him, that taught him great values and morals. Deacon Al was a man of great faith and loved to share the faith with others, especially his family. They would practice their faith together praying the Rosary, reading from the Bible and attending mass. Deacon Al and Eve were the true example and testament of a loving husband and wife. They were so in love and respected each other. Deacon’s faith in God was tested in 1999, when Eve passed.

Ballard-Sunder Funeral and Cremation proudly served and cared for the Schroeder family.

Offer Condolence for the family of Deacon Allan A. Schroeder