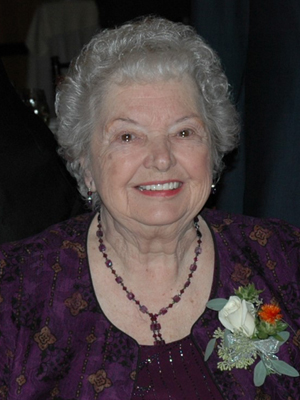 Wilma Emily Sellin, age 92, of Prior Lake, passed peacefully on Monday, November 9, 2020, at McKenna Crossing, in Prior Lake.  A private family celebration of life will be held on November 12, 2020.

On March 10, 1928, Riverdale, IL, Wilma graced this world as the eldest daughter of Henry and Emily (nee Pretzer) Wiegel. Intelligent, caring and outgoing, Wilma was active in school, church and community in the tradition of her Volga German Lutheran heritage.

She married Robert (Bob) Sellin on August 2, 1947 at St. Paul’s Lutheran Church in Dolton, Illinois.  Both Bob and Wilma’s families were lifetime members of St. Paul’s, creating the shared bond of family and faith that marked their amazing 68 years together until Bob’s death in 2015.  Even after moving to Rockford IL in 1970 and later McKenna Crossing in 2009, Wilma dedicated her life to her family, church and her community.

As their family grew to include three daughters and nine grandchildren, Wilma became the matriarch of multi-day family celebrations and vacation adventures including a special trip with each one of the grandchildren to the country of their choice.  From houseboat trips to cruises to a special family getaway on Wall Lake, MN, Wilma created family and faith memories for her children and grandchildren that reflected her values of generosity and passion to experience this amazing world.

Three daughters – Sandra Mandell of Chalfont, PA, Candace Petersen (spouse Richard) of Vancouver, WA, and Cynthia Sellin (spouse Bruce Viren) of Prior Lake, MN, mourn her passing but are comforted to know God has reunited her with Bob.

In lieu of flowers, please make a donation in honor of Wilma to a charity of your choice.  Wilma’s family would like to thank the wonderful staff at McKenna Crossing for the excellent care they provided Wilma.

Offer Condolence for the family of Wilma Sellin