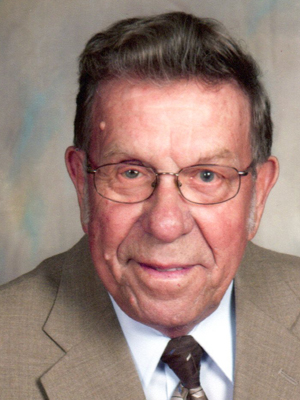 Willis “Bill” Bjorklund, of Shakopee, formerly of Prior Lake, passed away December 27, 2018 at the age of 92. A funeral service will be Thursday, January 3, 2019 at 11AM with a visitation 1-hour prior, all at Immanuel Lutheran on Fish Lake, 20200 Fairlawn Ave., Prior Lake. Rev. Dr. Brent Parrish will preside, and Bill’s grandsons will be pallbearers.

On February 28, 1926, Bill was born in Grasston, MN to parents Axel and Alice Bjorklund. Bill enjoyed his childhood, especially growing up on the family farm. Along with his cousins, Bill was a true “River Rat.” Rather than traveling the long way to town, he would raft across the Snake River.

Following his High School graduation, Bill enlisted in the Army and served during WWII. Upon his discharge, he returned to Minnesota and began working at Butler Brothers in downtown Minneapolis. Around this time, Bill went on a blind date with Ethel Rothe. The two hit it off and were married in Clear Lake, Wisconsin on March 4, 1950. Their marriage had a rocky start—their car, loaded with wedding gifts, broke down on their way home! Despite this, they were blessed with 65 years together.

Always a family man, Bill and Ethel moved to Oregon to be closer to Bill’s siblings. After the birth of their son, the family returned to Minnesota. They settled in Bloomington before moving to a farm outside Prior Lake. A carpenter by trade, Bill worked at Minnesota Valley Cabinets of Savage until the 1970s. He then worked as a custodian at the Prior Lake School until his retirement. While Bill was a hard worker, he always made time to have fun.

Whether it was the polka or waltz, Bill and Ethel could be found on the dance floor! They loved to dance and were joined by their friends and in-laws. Bill and Ethel also traveled throughout America. They took the train to Oregon and countless group trips by bus. Bill loved when his travels involved family—fishing trips to northern Wisconsin or the annual family camp out at Ethel’s family farm. Bill was especially proud of his grandchildren! He enjoyed attending their school events and supporting them.

Bill was a wonderful storyteller, a true family man, and a caring husband. After Ethel’s stroke in 2010, Bill devoted himself to caring for her until her passing in 2015. He has been reunited in Heaven with his wife, Ethel, where they are dancing together again.

Offer Condolence for the family of Willis “Bill” Bjorklund