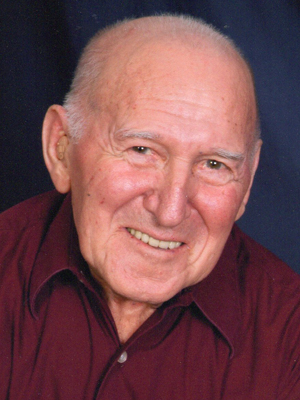 Wilfred “Willie” Stocker, age 86, of Jordan, MN, was welcomed to his heavenly home Friday, January 11, 2019. He passed away encircled by family at St Mary’s Hospital, in Rochester, MN.

A visitation will be on Monday, January 14, from 4-7 pm, at Ballard-Sunder Funeral and Cremation, 104 West First Street, Jordan and from 9:30-10:45 am, followed by a Christian Funeral, at 11 am, on Tuesday, January 15, at St Paul’s Lutheran Church, 100 Sixth Street West, Jordan. Pastor Jeremy Glowicki will preside, with grandchildren acting as pall bearers. Willie will be laid to rest at Spirit Hill Cemetery, in Jordan, with military honors provided by the Jordan Vets Honor Guard.

In his parents’ home in Jordan (now the location of the Mini Met), Wilfred Charles was born to parents, Philip and Margaret (Zaun) Stocker. He was the second youngest of nine children, Elmer, Theresa, Rosalia, Sister Josephine, Melvin, Marcella, Ralph and Irene. Family has always been important to Willie. They enjoyed the simple things in life, like going for picnics at Fish Lake and hanging out around town. He attended Jordan schools and began working at the Gold Spot and Dairy. Willie enjoyed this job immensely, especially when he learned the characteristics of the pinball machines!

Willie proudly served in the United States Army during the Korean War. Returning from the services, he worked for several years at Minneapolis Moline. Willie then excepted a metal fabrications job with Viking Steel Products in Shakopee, MN, for the next several decades. After retiring, he took on a part time job for several years with Nordic Track, before official retiring!

Willie loved kicking up his heals at the local dance halls. While at the New Prague Dance Hall, Willie asked out Ruth Liefer, after chasing her for a year, the rest became history. On April 25, 1959, at St Paul’s Lutheran Church, they wed. Willie and Ruth continued living in Jordan and became proud parents to Ann, Ken, Bill and Karen. As a family, they too enjoyed the simple ways of life. They looked forward to the annual summer vacation to the Brainerd Lake areas, especially fishing. As a couple, Willie and Ruth continued to go dancing, attending flee markets and garage sales. It was in their later years were their richest years…becoming grandparents! Willie and Ruth relished watching the grandchildren, especially celebrating each New Year’s Eve with them.

In Willie’s spare time, he enjoyed woodworking and tinkering in the shop. Willie’s spent countless hours, straightening nails, organizing the shop and in later years, making unique wood pieces. He was known for his Christmas ornaments, custom shelving and endless crosses for St. Paul’s Church. Willie loved to play Euchre and Cribbage with the family, even up to the night he passed. Willie had a great sense of humor and often telling people the latest jokes.

Offer Condolence for the family of Wilfred “Willie” Stocker