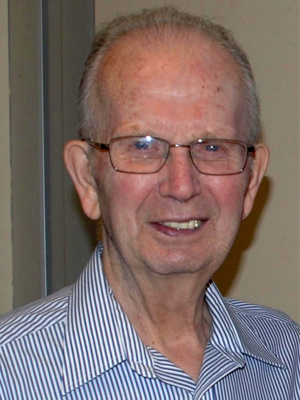 A celebration of Wayne’s life will be held on Monday, July 26, 2021 at 11:00 AM, at Shepherd of the Lake Lutheran Church, 3611 N Berens Rd NW, Prior Lake, with Pastor Karen Treat presiding. Time of gathering will be held prior to services from 10:00 – 10:50 AM. Interment will be held following services at 3:30 PM at Hillcrest Memorial Gardens, Albert Lea.

Wayne was born on January 2, 1931, on a farm just outside of New Richland, MN, to Laurel and Annie (Sunde) Munson. He was raised on the farm with his younger sister Solveig. Around the age of 10 the family moved to Albert Lea. Wayne graduated from Albert Lea High School in 1949, before getting a job with Wilson’s (later Farmstead) Meat Packing Plant, where he would spend the majority of his career. Wayne honorably served his country in Korea during the Korean War.

Wayne was blessed to meet the love of his life at a Grace Lutheran Church young adults’ group in 1956. Wayne Munson and Patsy Gates were united in marriage in Wakefield, MI on August 9, 1958. Soon after, they were blessed with three children: Doug, Greg, and Joan. Wayne and Patsy lived on Lloyd Place in Albert Lea for over 50 years.

Wayne was the consummate family man. He was constantly serving his family by getting kids to sporting events at all hours of the day or night. Taking the family on vacations as well as boating and skiing on Fountain Lake. He always had time and energy to get on the floor and play with children and grandchildren. He was always present for his beloved family.

His faith in Jesus was also very important to him. He served as an elder and deacon at Calvary Baptist Church in Albert Lea, and later served at Crossroads Evangelical Free Church. Through Wayne’s steadfast, servant-oriented faith, he was an inspiration to his children who are also all following Jesus.

Following retirement in 1995, Wayne continued serving at church and in the community through activities such as Meals on Wheels. On May 24, 2014, Wayne and Patsy decided to move to McKenna Crossing in Prior Lake to be closer to family. They love the community they have been part of at McKenna.

Wayne will be reunited in heaven with his parents.

Offer Condolence for the family of Wayne Munson