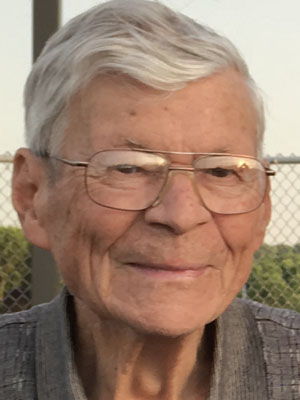 Warren Shepley, 95, of Northfield, MN, formerly of South St. Paul, MN, and Sun City, AZ, passed away peacefully on November 7, 2020. His influence as a father, grandfather and great-grandfather will be cherished.  Services will be held the Spring of 2021.

Warren William Shepley was born on July 23,1925, to Judge Lewis and Josephine (Clark) Shepley in Minneapolis, MN. He was the younger of two brothers. He spoke fondly of his grandma, Minnie, who lived in their home, attributing his love for books to time spent reading with her.

As a boy, Warren helped his family build their cabin on Lake Superior in Herbster, WI. They spent many summers exploring the area, often picking fresh wild blueberries for his mother’s famous blueberry cake recipe. In school, he was once disciplined by being made to learn the alphabet backwards, a skill he retained and exhibited for all his life. Warren was a devoted Boy Scout and achieved the rank of Eagle Scout.

Warren was proud to have graduated from South Saint Paul High School in 1943. Immediately after graduation, he joined the US Army Air Corps, serving from 1943 to1946. He was trained as a navigator for a bomber crew and was one of the first people educated on Radar.

After the war, Warren attended Hamline University and the University of Minnesota, graduating in 1949. While at Hamline, Warren met a special lady working in the bookstore, Patricia Strait. On the way home from a Hamline basketball game, he asked her to marry him (he had been waiting all night for the right moment). He had to wake Pat up in order to give her the ring. Warren & Pat were married on October 22, 1949, at United Methodist Church in Jordan, MN.

Warren and Pat began their married life in Glencoe, MN, where they were active members of the First Congregational Church. Warren worked for the REA in Glencoe and later for the Oak Grove Dairy in Norwood, MN.  Warren and Pat enjoyed great friendships with several couples in a “Potluck Group” which met, monthly in their homes and later in restaurants, for nearly 60 years.

The couple had four children and Warren was involved as a leader in their 4H and Boy Scout activities. Family vacations included numerous road trips camping in State and National Parks around the country. Two epic vacations involved a 1965 camping trip to the west coast including Disneyland and the Grand Canyon, and a 1967 trip to the east coast including the World’s Fair in Montreal and historical sites in New York, Philadelphia, Boston, Washington D.C. and Gettysburg. They made frequent visits to see their grandparents at family cabins on Spring Lake and Lake Superior.

The family resided in Glencoe until 1969, when they relocated to Redwood Falls where Warren worked as business manager for the school district. In their Redwood Falls home, Warren built an extensive train set that filled the basement. They made many friends as members of the First Presbyterian Church of Redwood Falls.

Following their 1989 retirement, Warren and Pat spent winters in Sun City, Arizona, and summers in Herbster, Wisconsin, welcoming guests and entertaining many visitors in both locations. They also traveled the world, with trips to Alaska, Hawaii, Costa Rica, Iceland, Scotland, and numerous European countries. They attended the Passion Play in Oberammergau, Germany, cruised the Panama Canal, and attended the 2002 Winter Olympics in Salt Lake City, UT. There was always an Elderhostel magazine handy to check out where they would go next.

Warren always had a story to tell of his life, or an interesting fact to share about some location they had visited.  He enjoyed traveling, reading, spending time at the Herbster cabin attending area fish fries and fish boils, cheering on his children and grandchildren in their sporting events and musical pursuits, and spending time with family.

Arrangements are with Ballard-Sunder Funeral & Cremation in Jordan, MN.

Offer Condolence for the family of Warren “Shep” Shepley