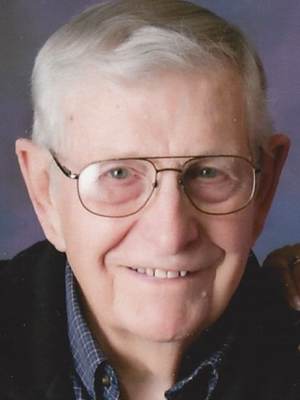 A Mass of Christian Burial will be held on Wednesday, October 21, at 12 (noon), with a visitation starting at 10:30 am, at St. Michael Catholic Church, 16400 Duluth Avenue SE, Prior Lake. Father Rick Banker and Father Tom Walker will preside. Pall bearers for Vern will be Gary Lyons, Bob Pexa, Carl Johnson, Scott Jeanson, Mathias Schneider, and Casey T. Schultz. He will be laid to rest at a private family graveside at St. Michael Catholic Cemetery, in Prior Lake.

Vern was born December 1, 1929 in St. Paul, MN and grew up by Lake Como. He and Toodie (Jeanson) Schultz were married on June 21, 1952. They eventually moved to Prior Lake where they raised their family.

Vern was truly a man for all seasons. He graduated from the University of Minnesota and was captain of their 1952 baseball team. Vern coached the three major sporting teams at Saint Agnes High School for two years, where he also taught history. Vern was inducted into the Saint Agnes Hall of Fame for leading their 1953 football team to their only undefeated season in the history of the school. After getting his master’s degree in special education, Vern changed occupations in 1956 joining the field of vocational rehabilitation. He soon was offered the position of Director of Vocational Services, at the Kenny Institute and later returned as an administrator in the state vocational services program. Vern designed a program to reduce special education school dropouts and joined the St. Paul Schools, as the Special Education Supervisor to head up this unique program. The state education department called Vern, “Mr. Transition“ because of this program’s amazing success. Many people with special needs are gainfully employed today due to the inception of this program.

Vern officiated football and basketball games for 38 years to keep active in the sports world. He was a talented musician, playing his saxophone and singing in local bands for 70 years, leading his Hi-Hat trio for the past 20 years. The Hi-Hats played at local senior dances and at senior residences in the area. The Hi-Hats also played many times on the local TV show Polka Spotlight. It was Vern’s goal to be able to play his horn at the age of 90. He met and exceeded this goal by playing with the Hi-Hats six times after his 90th birthday.

Vern was active and president of over 10 social services committees including Saint Paul Big Brother program, was chairman of the Saint Paul Mayors Advisory Committee for the handicapped and the president of the Nevis Huested foundation for the handicapped. Vern authored four books, the last one, just published, entitled “Baseball Before the Twins.” He was an active member of the Saint Michael Catholic Church, in Prior Lake.

Ballard-Sunder Funeral and Cremation proudly served and cared for the Schultz family.

Offer Condolence for the family of Vernon A. Schultz