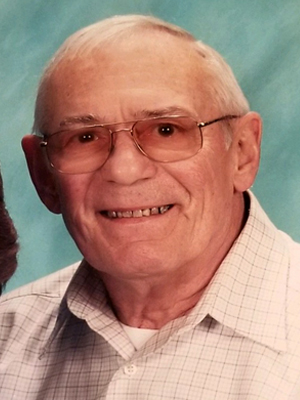 Vernon Hartman, age 85 of Jordan, MN, passed away on Thursday, November 4, 2021 surrounded by his loving family.

A Mass of Christian Burial will be on Friday, November 19, 2021, at 11:00 AM, with a time of gathering two-hours prior, both at St. John the Baptist Catholic Church, 313 East Second Street, Jordan, MN. Father Neil Bakker will preside. Interment at St. John Calvary Cemetery. As a suggestion, please make a donation to St. John’s School.

Vern was born to John and Helen (Jelen) Hartman on May 27, 1936. He was born and raised on the family farm, southeast of Jordan, with older sister Patty, younger brothers Gene and Ken. They were the BEST of FRIENDS. Vern attended St. John the Baptist Catholic School in Jordan through the 8th grade. From there, he went on to work on the family farm. Vern enjoyed the farm life and taking care of the animals. His favorite part was when the little piglets were born. Vern enjoyed playing both fast and slow pitch softball, ice skating in the cattle barn at the ballpark with his buddies, ice fishing and hunting. He was involved in the Knights of Columbus for many years, and faithfully participated in the St. John’s perpetual adoration.

Vern met the love of his life, RoseMary Mechtel, at her brother Jan’s raspberry patch in 1955 and married two years later in 1957 at St. Mary’s Church of Purification in Marystown. In 1958, they started their family which grew to 6 children, Don, Anna, Corinne, Donna, Kevin, and Keith.

After working on the family farm, Vern spent most of his career at All American Glove Company, as the plant manager. Vern’s passion was woodworking and fixing something that was “un-fixable”. He donated countless items to the St. John’s fall festival. After retiring, Vern started his own business, Vern’s Woodworking and Refinishing. He always enjoyed visiting with the people who dropped off their furniture and he loved to see the joy on their face when they saw their finished piece. It always made his day, when he made someone else’s day.

Vern loved spending time with his friends and family. He always enjoyed cooking something up on the grill. Whether it was just him and Rose or when the family came home for a visit or holiday, there was always plenty to eat. Vern always made extra’s just in case one of the kids popped in, which happened quite often. He also enjoyed playing boccie ball and horseshoes in the yard with family, euchre, and watching the Minnesota Twins or Vikings games. Vern enjoyed listening to the old-time music channel and doing word search to keep his mind sharp. Vern was not one to travel, but he did manage to take a few trips with his family, including the Apple River and the Grotto in Iowa. Vern also took pleasure in taking his family out to eat, spending time at the casino, taking in an occasional movie, playing cards, and keeping his yard looking like a ballpark.

Vern was quick witted and loved to laugh. Along with his lighter side, he also had a work ethic that couldn’t be matched, and his work was always done to perfection. Vern’s love for his family was evident in everything that he did.

Offer Condolence for the family of Vern Hartman