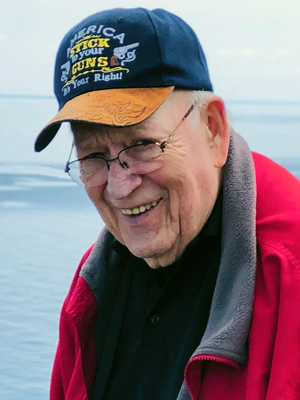 Vern “Butch” Soll passed away on September 10, 2022 at the age of 86 after a courageous battle with cancer. He was surrounded by his loving family, who will continue to honor his legacy by passing on the same family values that he instilled in them. His Celebration of Life will be held on Sunday, September 18th at Ballard Sunder Funeral Home in Prior Lake, MN. (4565 Pleasant St.) There will be a visitation/time of gathering from 1:00-3:00, followed by a Memorial service at 3:00. In remembrance of Vern and his favorite attire, we ask that everyone who is able to attend wear jeans. It’s not required, but he would Love for everyone to be comfortable!

Vern was born on June 28, 1936 to parents Willie and Alma Soll in Ann Township, MN. He was the youngest of 6 children, with a 5-year difference between him and his next oldest sibling LaVonne. These two formed a special bond early on in life, which continued throughout their lives. Like typical kids, while growing up they loved the outdoors. After moving around to a few different farms that his Dad worked on, Vern moved to Worthington with his Mom and sister LaVonne because his Mom got a job at Campbell’s. This is where Vern attended middle school, and the beginning of high school. His Mom passed away suddenly when he was in 10th grade, so he lived with his Mom’s friend until the end of his Sophomore year. After that, he moved back to Westbrook and lived with his oldest sister Alice, her husband Walt, and their daughters Roberta and Rozy. Walt is the one who gave Vern the famous nickname of “Butch” which carried on throughout his life. During high school, Vern “ran” with a bunch of great guys from the Des Moines River Rats softball team. In the summer, they spent most of their time at the lake swimming and fishing, and maybe doing a little partying once in a while. He also enjoyed doing a lot of trap shooting with his family.

After graduation, Vern started working various jobs and was a “jack of all trades” until he decided to enlist in the United States Army. He was stationed at Fort Ord, California and then again at Fort Lewis, Washington. In the service, he drove armored personnel tanks (mostly M59’s) and was decorated with the badges of Sharpshooter (rifle), Good Conduct Medal, and Expert (Carbine). He was very proud of his service to his country and held onto many fond memories that he gained through this experience.

Once Vern moved back to Minnesota, he moved to South Minneapolis and continued working various jobs until he began his career in the heavy equipment industry. He quickly developed a new group of friends, and one of these friends was a mutual friend of a great gal named Jan Wicktor. The two were set up on a blind date (and Jan told the story that she was told “Vern makes good money” so she decided to give it a try) and the rest is history. They fell in love and got married on June 13, 1964 in Santiago, MN. Vern and Jan were blessed with three wonderful children: Steve (1968), Jeni (1972), and by surprise Suzie (1974). They lived in an adorable house in North Minneapolis until moving to their forever home in Credit River Township (Prior Lake) in 1977. Vern worked for Borchert Ingersoll for many years until he started the final phase of his career at Hayden Murphy in Bloomington, MN. He finally retired in December 2001, after packing a lunch from home every single day of his working life. Family meant everything to Vern and Jan, and they instilled that core value into their children. “Money doesn’t make you rich, love does”. The family loved to spend time together playing cards, enjoying the outdoors, and connecting with friends and family. The highlight of their year was always their annual family vacation, where they spent a week in July at Cass Lake with extended family.

Painfully, in March of 2005 Jan was diagnosed with stage 4 ovarian cancer. Vern threw himself into taking care of his beloved wife, who had always taken care of him and the family. He cooked, cleaned, took her to every appointment, spent nights in the hospital with her when she had surgeries, and never complained once during her 5-year battle. He always had her back!

Vern was strong, but soft spoken. He was kindhearted, but had a fiery twinkle in his eyes. He was definitely one of the “Good Guys” and was an amazing husband, father, grandfather, brother & brother-in-law, uncle, friend, and the list goes on. Even though his silent suffering is over, his presence will be eternally missed by everyone he knew. Vern is survived by his Children: Steve Soll, Jeni (Jerry) Irwin, Sue (Jason) Nordmeyer; Grandchildren: Ryan, McKenna, Laynie, Ava, Rylee, and Wyatt; Sister: LaVonne Hanson. Preceded by Wife: Janice (Wicktor) Soll, Siblings: Alice (Walt) Sell, Oran (Margaret) Soll, Fritz (Marilyn and Elaine) Soll, Norrie (Aggie) Soll; In-laws: Merlin and Margaret Wicktor, Dick andArdy Almberg.

In lieu of flowers, memorials will be distributed by the family to the organizations of his choice which includes the fellow Veterans who send him off with his final salute.

Offer Condolence for the family of Vern “Butch” Soll