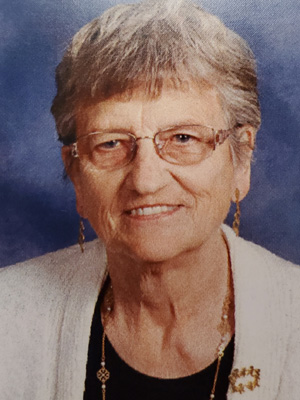 Valdene Martha Hodapp, 88, died on Monday, August 17, 2020, at Gundersen Lutheran Medical Center in La Crosse, WI, due to complications from a fall.

A memorial service honoring Val was held on August 25, 2020 in Viroqua, WI.

Val was born on January 6, 1932, to Fred and Caroline (Tietz) Bohnsack on the family farm in Lanesburgh Township, Le Sueur County, Minnesota. She attended a one-room schoolhouse as a child, and went to high school in New Prague and Jordan. On October 10, 1949, she married Gregor John Hodapp at St. Paul’s Lutheran Church in Jordan.

Greg and Val lived on Prior Lake when her children were young, before moving to Canyon, MN, Duluth, MN, Los Angeles, CA, and Grants Pass, OR. Greg died in 1984 at the age of 56, and Val continued her career in early childhood education as Preschool Director at Rogue Community College in Grants Pass. In 2011, at the age of 79, she decided to move back to her Midwest roots. She and two of her sons hopped in a U-Haul truck with all of her belongings and made a memorable road trip to Viroqua, WI. She bought a home and lived there until moving into Maplewood Terrace in 2019.

Val was a woman of strong faith, and enjoyed volunteering at church. She liked traveling, gardening, canning, photography, writing, reading, and scrapbooking. She also had a life-long passion for children. While raising her three boys in Prior Lake, she began assisting their teachers at school with parties and field trips, and became a Cub Scout Den Mother. When her boys were in high school in Duluth, she got a Family Day Care license and started a morning preschool in her home. When the family moved to Los Angeles, she enrolled at UCLA and received a CORE Certificate in Early Childhood Education. She worked in two corporate day care facilities, attaining the position of Director. After moving to Grants Pass, she offered to donate her time to the Rogue Community College Day Care Center, and within a year was hired as their Director. She remained there more than 20 years, mentoring some students to become accredited themselves. She was on the board of the Southern Oregon Head Start, and the Oregon Association for Education of Young Children, serving as local chapter President for 4 years.

Offer Condolence for the family of Valdene Hodapp