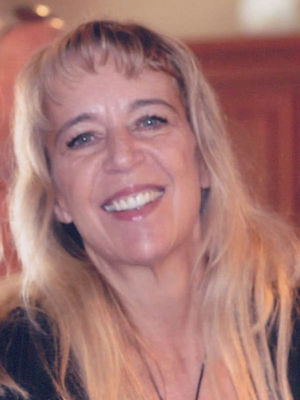 Sue was born on June 3, 1958 in Rochester, MN, to Dr. Hugh and Lillian (McKellar) Williams. She was raised in North Oaks, MN with her two siblings, Brian and Hugh, attending high school in Moundsview before attending college at the University of Minnesota-Duluth and getting a degree in optometry. She used this degree on and off her whole life, working many different places over the years, including at the airport and for Sam’s Club later in life before spending some time at Shakopee Vet until her retirement.

Following her schooling, Sue was united in marriage to David Larsen and was blessed with two children, Jenna and Justin. Together, they raised a family in Watson, MN for about 15 years before going their separate ways.

Some time later, Sue’s life changed when she met Bob Rogstad through some of their mutual friends. After about two years, Bob paid for a flight out to Reno, NV despite his free miles working for the airline, and they were married on May 3, 1996. Now a family, Bob and Sue flew for free on the way back.

With the airline miles, Bob and Sue enjoyed many trips around the country and overseas, traveling to places like Amsterdam, London, Germany, Switzerland, Paris, Mexico, New York, San Francisco, and back and forth between Florida and Minnesota.

When they weren’t traveling, Sue loved to cook. She had countless cookbooks and tuned in regularly to all kinds of cooking shows. She was known for her fabulous Thanksgiving and Christmas meals, hosting family and friends many times over. Sue also enjoyed decorating and was fastidious with her housekeeping. Everything was in its place and spotless in Sue’s home.

Over the years, Sue had many good times, but also had some medical struggles. At one point, she was told she’d never be able to walk again but refused to let that be the case. After going through rehab, she was able to overcome her struggle and get back up on her feet again. Through these struggles, Bob was always by her side, even transferring jobs to Jacksonville to be there for her while she spent extended time in the hospital. After extensive care over the years, it was fitting that Sue’s final act of kindness was to give the gift of life through eye donation, helping another person in need.

She was preceded in death by her parents.

Memorials are preferred and will be donated to N.C. Little Hospice in Edina.

Offer Condolence for the family of Susan Rogstad