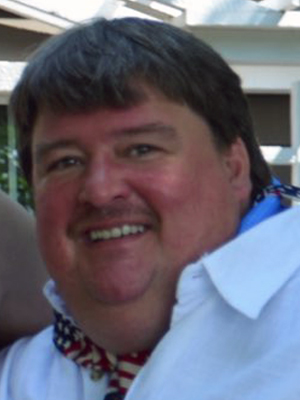 Steve Robards, of Portland, Oregon, passed away unexpectedly at the age of 56.  He had a big personality and an even bigger heart.

On November 24, 1964, Steven Anderson Robards was the only child born to Richard & Janet Robards.  Steve was a wonderful blessing to his parents and family.  He was always a happy boy and enjoyed growing up in Portland.  Although Steve’s parents went their separate ways, they were dedicated parents and loved Steve very much.

As a boy, Steve took many trips to the Midwest to visit his extended family.  Whether he was jumping in the chilly lakes of Minnesota, spending the summer with his grandparents in South Dakota, or getting into mischief with his cousins in Wisconsin; Steve was always happy to be with his family and proud of his Midwestern roots.

In high school, Steve was a competitive athlete and excelled in football.  He played both offense and defense and made many lifelong friends on the field.  Steve graduated from Centennial High School in 1983.  He was voted the Leader in School Spirit and Student Body President.  Everyone loved Steve and wanted to be his friend.

Next Steve attended Brigham Young University before moving back to Portland to begin working full time.  Steve was an incredibly hard worker.  You could always count on him to get the job done and to do it right.  Over the years he worked at Montgomery Ward, Grand Tree Furniture and the Home Depot.

The best job Steve ever had was as a DJ at a local lounge.  “Rockin’ Robes” was the life of the party!  Steve had a knack for connecting with the patrons and entertaining them all night long.  Steve had such an expansive knowledge of music which served him well on the job.  Whether he was attending a concert with friends or simply listening to records at home, music could always put a smile on his face.

Steve had many interests, but the most important things in Steve’s life were his family and friends.   Steve was such a kind and compassionate man.  He was generous to a fault and always put others before himself.  Steve had a great sense of humor and was a joy to be around.

Steve now lives on in the hearts of his family and friends.  He is survived by his aunts, Sharon (Jerry) Friend, Judy (Bruce) Kobs and Wendy Schultz; his extended family, dear friends, wonderful neighbors and coworkers.  Steve was greeted in Heaven by his mother, Janet Robards; father, Richard Robards; and his grandparents.

Offer Condolence for the family of Steve Robards