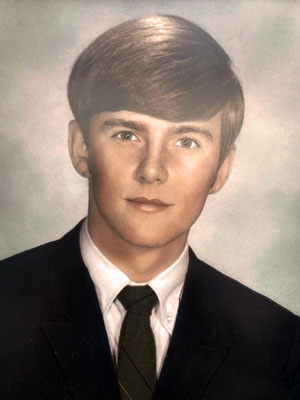 Stephen J. Haugh, age 70, of Prior Lake, MN, entered God’s arms in the morning hours of November 30, 2022, at Southdale Hospital, from complications of a stroke.

A Mass of Christian Burial will be held at 11 AM on Friday, December 9, 2022, with a time of gathering beginning at 9:30 AM, all at St. Michael Catholic Church, 16400 Duluth Ave SE, Prior Lake. Father Tom Walker and Steve’s cousin, Father Kevin Kenney, will preside. Steve will be laid to rest at Credit River Cemetery. In lieu of flowers, memorials are preferred in memory of Steve.

The oldest of two sons, Steve was born in Minneapolis, MN, on May 16, 1952, to parents Rolly and Jeanette. He grew up on the family farm in Credit River and attended St. Michael Catholic School. From a young age, Steve was incredibly dedicated to his education- he was a straight A student and was always challenging himself to excel. Steve was the Spelling Bee Champion of his 8th grade class. He later attended Prior Lake High School, graduating in 1970 as Class President. Following his graduation from high school, Steve attended the University of Minnesota Duluth and Twin Cities campuses to earn a Bachelors degree. He then went on to attend William Mitchell Law School to earn his Juris Doctor, as well as a Masters Degree of International Management from the American Graduate School of International Management.

While in college, Steve’s love for travel was ignited. Through summertime backpacking trips with friends, he visited over 15 countries across Europe, and even spent time studying abroad in Soviet Russia. Later in life, Steve traveled to various countries in Africa, South America and the Middle East. His travels led him to become fluent in many different languages; Russian, Spanish, German and French to name just a few! Through his mastery of other languages and his charismatic, easy going personality, Steve was able to make many friends across the globe.

Steve’s travels also influenced his professional life, leading him to open a successful Immigration Law practice in New York City. Steve lived and practiced law in New York for over 30 years and loved being a New Yorker- he lived on the Upper West Side and was proud to serve his community. He was a member of many professional organizations, such as the American Immigration Lawyers Association and the Tunisian-American Chamber of Commerce. Steve continued to travel throughout his career, visiting Tunisia, Libya, Yemen, and other African and Middle Eastern countries to help educate people on how to immigrate to the United States. After the tragedy of 9/11, his law practice changed. Due to this and his mom’s declining health, Steve decided to move back to Prior Lake in 2005.

Outside of work, Steve loved to read and stay up to date on current events. An avid learner, he always wanted to learn something new- the Discovery and History channels were often on his TV, another way for him to educate himself about history, technology, and the world. He was also an avid Star Trek fan, watching every episode from the very beginning of the show! Steve had a special connection with his nieces and liked to spoil them and keep up on whatever they were up to.
Steve was a calm, open minded man who never had a bad word to say about anyone- his kindness and generosity will forever be missed by his brother, Tom (Mary) Haugh; nieces, Kris (Michael) Weis, Rachel (Nate Johnson) Haugh; great nephew, Henry Weis; aunts, Ronnie (Cliff) Walker, Marilyn (Glen) Springer, Betty Haugh; uncle, Wayne Tonsager; and many loving cousins and friends.

He is preceded in death by his parents, Rolly and Jeanette; aunts, Shirley Hoyle, Kathy Tonsager, Marilyn Carlson; and uncle Bob Haugh.

Offer Condolence for the family of Stephen J. Haugh