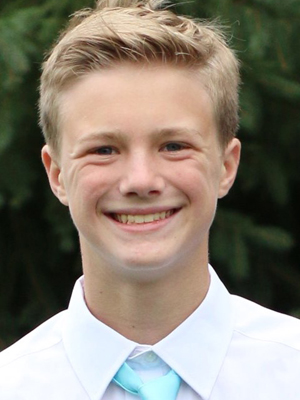 Sam Foltz, age 14 of Prior Lake, died on February 3, 2019 after suffering complications resulting from a car accident. A funeral service will be held Sunday, February 10, 2019 at 4:30PM with a visitation starting at 2:00PM all at Shepherd of the Lake Lutheran Church, Prior Lake. Pastor Dan Poffenberger will preside. Acting as pallbearers are Sam’s cousins, Easton Jacobson and Christian Urness, and his friends, Will Anderson, Tom Anderson, Ren Anderson, Ben Anderson, Ian McKowen, Jack Hulskotter, and Bruce Soukup.

On May 22, 2004 in Denver, CO, parents Kari and Jason celebrated the birth of Samuel Jason Foltz, their first child. During Kari’s pregnancy, the couple chose not to know the gender. They were so excited when their little, blue-eyed baby boy was born! Sam felt a special connection to his birthplace. A proud mountain man, Sam was only two and a half years old when he put on his first set of skis.

The family eventually moved to Prior Lake where Sam attended school. He excelled academically and participated in numerous activities—band, basketball, tennis, football, lacrosse, golf, and skiing. Sam enjoyed the comradery of group sports. He proudly lettered in band and Alpine skiing.

Surrounded by an amazing community, Sam had the best neighbors and friends. They played tag on the beach and docks, went jet skiing, and played broom ball and hockey in the winter. Sam loved sleepovers, especially staying up late playing Xbox. Last year, Sam made the most of his boating license. Along with friends, Sam spent countless hours on Prior Lake.

When Sam was three years old, he gladly welcomed a new addition to the family, his little sister Katie. The two had an unshakeable bond—they laughed, loved, fought, and forgave. Sam truly loved his family. He was especially close with his mom and trusted her opinion on just about everything. The family enjoyed traveling to Colorado, Florida, Arizona, Mexico, and throughout the Midwest. When his uncle taught him cribbage and buck euchre, Sam quickly caught on. Depending on who you talk to, Sam was the best in the family at cards.

While never outspoken, Sam was humorous and easy going. He looked forward to so many things in life. Sam anticipated the independence of receiving his driver’s license and getting a summer job. Along with his father, Sam wanted to travel to the Boundary Waters.

Sam was an amazing son, big brother, friend, and all-around genuine person. His kindness and generosity extends beyond his own life through organ donation. His donation provides renewed hope and life for others. Sam gave one of the most precious gifts possible—the gift of life itself.

Sam is greeted in Heaven by his grandfather, David Foltz.

In lieu of flowers a memorial fund will be set up in Sam’s honor.

Offer Condolence for the family of Samuel Jason Foltz