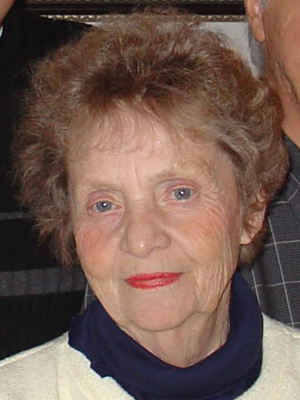 Ruth M. Marxen, a longtime resident of Jordan, entered eternal life on Thursday, July 11, 2019. She passed peacefully after receiving an anointment for the sick.

A visitation will be held from 9-11AM with Mass of Christian Burial beginning at 11AM on Thursday, July 18, 2019 all at St. John the Baptist Catholic Church, Jordan. Ruth will be laid to rest at Calvary Cemetery. Father Neil Bakker will preside and Ruth’s grandchildren will act as urnbearers.

On July 7, 1926 in Jordan, MN, Ruth was born to parents, Frank and Susan (Gregory) Sunder. The household primarily spoke German and it wasn’t until Ruth attended school that she learned English. She was raised on the family farm until her father passed away. Along with her mother and six siblings, the family moved into town.

Following her graduation from Jordan High School, Ruth began working at Woolworth’s in Minneapolis and later at the Edina Southdale location. Later in life, she waitressed at Wampach’s in Shakopee, Hazeltine Golf Course in Chaska, and the Riviera & the Dinner Theater in Chanhassen.

Ruth was married to Henry Marxen at St. John the Baptist Catholic Church in Jordan. This union was blessed with five children. Ruth was a loving and devoted mother. She was especially proud of her grandchildren and great-grandchildren.

In her free time, Ruth enjoyed being with her family. She also spent time volunteering at the Minnesota Arboretum, gardening, and making macramé hangings. Ruth’s interest in watching and playing golf was spurred by her time at Hazeltine. She met many famous golfers, even receiving a kiss from Lee Trevino.

Offer Condolence for the family of Ruth Marxen