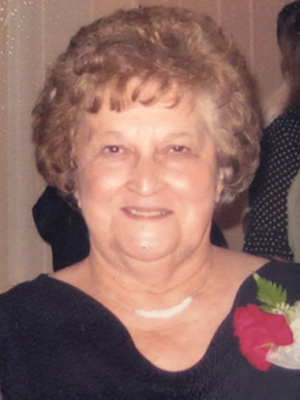 Rosemary “Rosie” (Tikalsky) Busch, of Jordan, passed away February 17, 2019 at the age of 82.  A visitation will be held on Wednesday, February 20, 2019 from 4:00 – 7:00 PM at Ballard-Sunder Funeral & Cremation (104 First Street West) in Jordan.  Mass of Christian Burial is Thursday, February 21, 2019 at 11:00 AM with visitation one-hour prior at St. John the Baptist Catholic Church (313 East 2nd Street) in Jordan.  Father Neil Bakker will preside.  Rosie will be laid to rest at Calvary Cemetery, and pallbearers will be James Link, Ryan Link, Adam Gill, Luke Busch, Will Busch & Jason Haus.

On September 4, 1936, Rosemary Elizabeth Tikalsky was born to parents Daniel & Ludmilla Tikalsky.  Rosie was the oldest of seven children.  She grew up in New Prague and spent much of her time working at her family’s grocery & produce store.  After graduating from New Prague High School, Rosie further pursued her education at St. Kate’s & Mankato State.  Rosie earned her teaching degree from Mankato, and she began working as an elementary school teacher.  Rosie worked in the Minnetonka & Jordan School Districts.  She had her own kindergarten classrooms for a few years and then became everyone’s favorite substitute teacher.

As a young woman, Rosie met the love of her life at a dance.  Jim & Rosie’s love grew quickly, and they exchanged wedding vows on New Year’s Eve 1960.  They settled in Jordan, and were blessed with five wonderful children, Jean, Margaret, Connie, James & Daniel.

When Rosie was 27, her mother died suddenly in a car accident.  Rosie was now the matriarch of her family and helped look after her younger siblings.  It was Rosie’s love and commitment that kept her family together during this difficult time. Rosie instilled the importance of family in her own children too.  They got together for many Sunday dinners with Grandpa Dan every week, and Rosie later continued this tradition at her home.

When her kids were young, Rosie worked part time as a substitute teacher so she could be home with the kids.  She also worked as a waitress at the Triangle Café and as a cashier at Target.  Rosie was also the bookkeeper for the Busch Farm Store.  Rosie was so organized and kept meticulous records.

She also kept wonderful records for her family.  Rosie always had her camera with her and was an avid scrapbooker.  Rosie was the family historian and knew when everyone’s birthday and anniversary was. She made sure everyone got a card on their birthday.  Rosie was the ultimate hostess.  She & Jim had the whole family over for every holiday.  Rosie made sure everyone was well fed and left her home with a treat.

In their free time, Rosie & Jim enjoyed going on little adventures together to Menards, the casino and up to the cabin with Butch & Gloria.  Rosie played a monthly game of Sheepshead, and she was a member of the same card club for 60 years.  Rosie enjoyed watching Jeopardy, Wheel of Fortune and listening to WCCO Radio.  She was an active member of St. John’s church.  She served on the Parish Council and the St. John’s Luncheon Committee.  Rosie was a devout Catholic and a faithful woman.

The most important thing in Rosie’s life was her family.  She was at every game, play, concert, recital, baptism, confirmation, birthday & wedding.  Rosie never missed a family event.  Rosie had a huge heart and put everyone else before herself.

During the early morning hours of February 17, 2019, Rosie went home to Heaven.  She passed away in her home surrounded by her loving family.

Offer Condolence for the family of Rosemary Busch