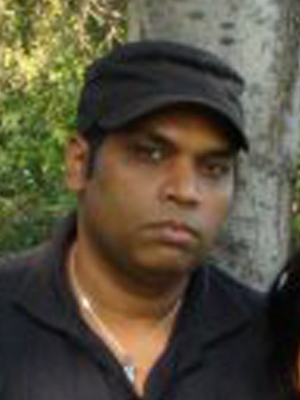 Ronnie Gaine, of Burnsville (formerly of Bangladesh), was born into Eternal Life on November 15, 2020 at the age of 52.  He will be deeply missed by all who loved him.

A Celebration of Life Service will be held on Friday, November 20, 2020 at 2:00 PM with visitation one-hour prior at Friendship Church (12800 Marystown Road) in Shakopee.  Pastor Kenny White will preside.  Ronnie will be laid to rest at Valley Cemetery in Shakopee.

On November 10, 1968, Ronnie Titus Gaine was born in Barisal, Bangladesh.  He was the seventh of eight children born to Samuel Gaine & Tresa Mondol.  Ronnie was always very independent.  Even as a boy, he followed his own path.

Ronnie was sent to a boarding school early in his childhood.  Being away from his family was difficult for Ronnie.  Then when he was in the 6th grade, his mother died from cancer.  These experiences were life-changing for Ronnie.  He developed a deep strength and strong self-reliance that served him well throughout his life.

After completing his SSC and HSC (equivalent to High School Diploma), Ronnie moved to Dhaka, the capital of Bangladesh, and got his Bachelor’s degree. It was his adventurous nature that took him to Japan next. He lived there for seven years. This was an especially important time in Ronnie’s life, because there, he came close to Jesus and became a Born-Again Christian.  From that moment on, he lived a complete Christian life. Ronnie also learned to play the guitar and incorporated music into his worship.  He loved playing and singing Gospel and Praise Music.

Next Ronnie moved back to Bangladesh and then to Singapore to further his studies.  He started his corporate career as an Operations Executive in Bangladesh upon his return from Singapore. During this time, family and friends introduced him to a lovely young woman named Ruth Sarker.  Ronnie and Ruth were married in Bangladesh on October 20, 2001.

Their love blossomed, and their marriage was filled with adventure.  Ronnie and Ruth moved to the United States on June 12, 2004.  Only five weeks later, their first child was born.  They were so thrilled to start a new adventure together in a new country.  Over the years, their marriage was blessed with many happy times and two wonderful daughters, Joan and Megan.  Although Ronnie and Ruth eventually went their separate ways, they always remained committed to their family and raised their daughters together.

Ronnie worked hard to provide a good life for his family.  He spent many years working as an accountant for the Hudson Group.  Although Ronnie was a talented accountant, he knew this was not his passion.  Ronnie had recently gone back to school at Dakota Technical to study Computer Science and had only a semester left for his next bachelor’s degree. He was able to work in this field while completing his studies, and he loved the work.

When Ronnie wasn’t working, he enjoyed pursuing his passion for aviation.  Ronnie loved to build and fly model airplanes.  Ronnie was working on getting his drone license, and he always had a goal to get his private pilot’s license someday.

Although Ronnie had many hobbies, the most important things in his life were his family and faith.  As a family, the Gaines enjoyed going to church together.  Whether he was at church or out ice skating with his girls, Ronnie always had the joy of Christ in his heart.

Throughout Ronnie’s life, no matter what obstacles got in his way, he always knew his faith would get him through it.  Ronnie lived his life with love and compassion.  He always carried Jesus in his thoughts and actions. As such, he was prepared. He would often say, “If God calls me tomorrow… I am ready!”  Ronnie’s family takes comfort in these words.

Ronnie will be remembered always by his two beautiful daughters, Joan & Megan Gaine and their mother, Ruth Sarker; his six siblings; many nieces & nephews; other loving relatives and friends.  Ronnie was greeted in Heaven by his parents and one sibling.

Offer Condolence for the family of Ronnie Titus Gaine