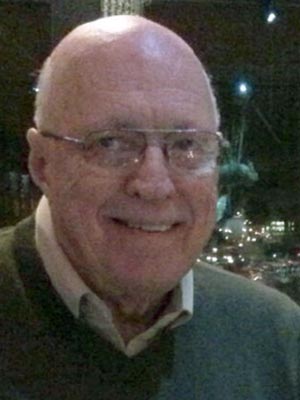 A Celebration of Life Service will be held on Saturday, December 7, 2019 at 1:00 PM with visitation from 11:30 AM – 1:00 PM at Trinity Lutheran Church (601 East Second Street) in Waconia. Pastor Phil Wagner will preside, and Ron’s nephews, James Dubbe & Rodney Dubbe, will act as urn and flag bearer. Ron will be laid to rest at Trinity Lutheran Cemetery in Waconia.

On April 11, 1938, Ronald Frank Dubbe was born to parents Frank & Marie (Busse) Dubbe. Ron was the youngest of two boys, and he always looked up to his big brother Roger. Ron loved growing up in Lydia and spending time on the family farms where his lifelong love of animals began.

After graduating from Jordan High School in 1956, Ron enlisted in the Army. He proudly served in the Army until his honorable discharge. While enrolled at Mankato State University, Ron met the love of his life, Ellen Novotny. Their love grew quickly, and they exchanged wedding vows at St. John’s Church in Montgomery on November 1, 1958. This union was blessed with 61 happy years of marriage and three wonderful sons.

Ron continued his education at the University of Minnesota where he earned his Doctor of Veterinary Medicine Degree. Ron’s specialty was dairy. He practiced in Waconia with his business partners at Waconia Veterinary Clinic until 1980 when Ron took his own path and began speaking across North America to dairy farmers about dairy cow nutrition and care. Throughout his life Ron also pursued many other ventures, including several patents that pertained to dairy production and health and was also involved with Pine Products until 1997.

He was a hard worker and provided a good life for his family. Together they enjoyed many family camping trips and lots of time spent at their cabin in Aitkin County. Ron always set a wonderful example for his family. He taught his boys the value of a strong faith and the importance of family.

Ron was a selfless man. He gave so much of himself to his family, profession and the community. Ron was President of the Congregation at Trinity Lutheran. He also served on the Stewardship and Building Committees. Ron served on Waconia Ridgeview Hospital Board for 11 years and also served on Mayer Lutheran High School Board of Directors. He also dedicated much of his time to professional groups both locally and nationally. Ron had a servant’s heart and was always willing to share his time and talents.

When Ron finally retired, he was able to spend more time with his family. Ron had a unique relationship with each of his grandchildren and great-grandchildren. He invested in each relationship and loved all of them deeply. Ron was so proud of his boys and their families. Ron also enjoyed reading, learning and making new friends. He was a talented woodworker and spent many hours creating beautiful pieces in his shop.

Although Ron had many hobbies, family and faith were the most important things in his life. Ron was a devout Christian, and his family takes comfort knowing that he was greeted in Heaven by his Lord and Savior.

Offer Condolence for the family of Ronald F. Dubbe, D.V.M.