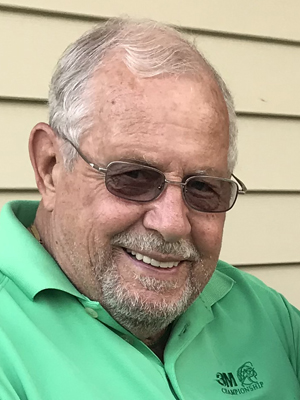 A time of gathering will be held on Wednesday, November 11, from 4-6 pm, at Ballard-Sunder Funeral and Cremation, 4565 Pleasant Street SE, Prior Lake. A Mass of Christian Burial will be on Thursday, November 12, at 11 am, at the Church of Risen Savior, 1501 County Road 42 E, Burnsville, MN. Friends and family who can’t attend in person are invited to stream the service at the following link: Bob Riegert Funeral Service (Meeting ID: 943 8109 3935 / Passcode: 687799). Bob will be laid to rest at St. John Catholic Cemetery, in Burnsville.

Robert Allen was born on March 3, 1937 in Minneapolis, MN. He was the proud son of Myron and Lucille (Anderson) Riegert. Bob was the first of four sons growing up in Bloomington, MN where he graduated from high school in 1955.

While as a teenager, Bob started selling produce on the side of the street, which led him to being offered a position with the local grocery store as a produce manager. While working at the grocery store, Bob also proudly served his country enlisting in the United States Navy. He first served in the Reserves, before volunteering for active duty for two years in San Diego, CA. Bob finished out his commitment back in the Reserves. The experience in the military and the grocery store prepared him to be a successful businessman. Bob took a leap of faith and became a realtor, before owning and operating two service stations in Richfield and Lakeville, MN. for many years. There he was a mentor to the many young men who worked for him.

While crossing paths at a wedding, Bob met Gloria Rebel. They started courting and on October 22, 1960, they were united in marriage at St. John the Baptist Catholic Church, in Savage, MN. The Riegert’s settled in Burnsville, where they spent the majority of their life. They were blessed with two precious daughters, Deb and Ronna. Bob was active in all four seasons of weather and generally had his family beside him. They enjoyed snowmobiling, boating, and camping in the motorhome, traveling all over the U.S. and Canada.

Bob remained a kid at heart throughout life. He enjoyed decorating the home with Christmas lights, taking the kids to the Torch Light Parade, and playing with all his outside toys! Bob was a huge NASCAR fan and enjoyed fishing, watching football, organizing and participating in snowmobile runs and donating time to Kids ‘n Kinship. He also enjoyed golfing and was a huge supporter of the 3M golf tournament coordinating the workers for every hole. Bob was a member of the Risen Savior church choir for many years and an active member of the American Legion.

Unfortunately, Bob experienced some dark times, especially with the illness and passing of Gloria. In 2007, he began wintering in Sun City, AZ and spent summers in Minnesota. Over the last decade, a whole new chapter in his life, gave Bob a reason to smile and purpose in life. He connected to a daughter Ruby he never knew. Each spring, Bob would visit her and her family before returning to Minnesota. He savored these times! In 2013, Bob made Sun City his permanent address. Over the last few years, he found great joy and companionship in his puppies Brandy and Alex, bringing him back to his earlier days of raising puppies.

Despite life’s trials and tribulations, Bob still found positivity in his life enjoying his many friends he called family in Arizona. Bob was extremely generous, felt his emotions deep, yet had a hard time expressing it. He was independent, strong willed and readily available in a time of need. Bob was charismatic, had a great sense of humor and showered everyone with his infectious laugh.

Offer Condolence for the family of Robert Riegert