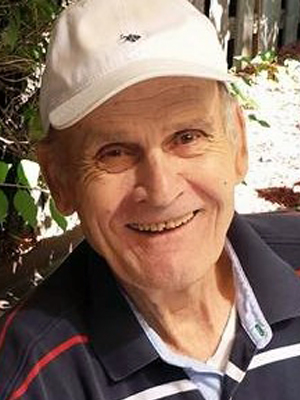 Robert Melvin Kes was born May 19, 1934, to Emil & Ludmilla (Pumper) Kes in Lonsdale, Minnesota. He was the eleventh of twelve children and the ninth son. Bobby attended Shakopee schools before moving to the new Prior Lake High School when it opened. As a member of the inaugural graduating class, he played football and baseball and was elected to be Homecoming King. After high school and a brief time at the University of Minnesota, Bob served as a combat engineer in the Army in Okinawa and Japan, where he also played football for the Eighth Army team.

After returning from overseas, Bob met Cecelia Anderson at the Marigold Ballroom and they were married on November 22, 1958. Together they raised seven children in Burnsville while each of them worked full time. Bob drove a forklift at the Ford plant in St Paul and when he got home, he fed the kids and got them to bed while Cecelia worked overnights as a nurse.

It was his willingness to be fully engaged in the parenting of the children where Bob really shined. His calm demeanor, patience and ready smile weren’t limited to his own kids, however. He was known to pitch for the neighborhood baseball games across the street from the house or throw the football for as long as the kids wanted to play.

At home he was generous with the ice cream and popcorn on Sunday evenings as the family gathered in front of the TV for “The Wonderful World of Disney”. At bedtime each of the kids was blessed with the sign of the cross; a tradition which has been carried on to children and grandchildren.

Bob was known as a simple man in the best sense of the word. He was humble, loyal, and loving to his children; a longtime member of the Knights of Columbus and a man of faith who earned the nickname “Father Kes” from his coworkers. Upon retirement, he and Cecelia built a home on Staples Lake in Comstock, Wisconsin where they hosted family and friends for shrimp boils, pontoon rides, golf, euchre & 500.

As Cecelia developed memory loss and dementia, Bob became her caregiver. Coffee in bed every morning, patience with the same story 3 times in 5 minutes, being her stability when the world became foreign to her. Her confusion was usually resolved with a simple “I’m here Cecelia!” Their marriage lasted 61 years before he laid her to rest in February of 2020. Since then, the staff at Yorkshire Senior Living in Edina have expressed their wish that all of the residents were like him. In fact, the world would be a much better place if there were more people like Bob Kes.

Offer Condolence for the family of Robert M. Kes