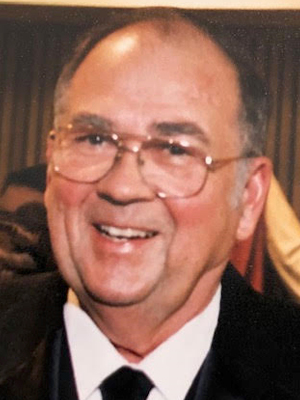 Robert “Bobby” Mertens, age 83, a longtime resident of Prior Lake, MN and Cross Lake, MN, passed peacefully with his loving wife at his bedside, at Augustana Emerald Crest, in Shakopee, MN. He fought a good fight with Lowy Body Dementia.

Bobby’s life will be honored with services all held at St. Michael Catholic Church 16311 Duluth Avenue SE, Prior Lake. A visitation will be Wednesday, February 6, from 3-7 pm and Thursday, February 7, from 9:30-10:45 am, with a Mass of Christian Burial, at 11 am. Father Xavier Goulet will preside. Pall bearers will be dear family and friends of Harold Beckman, Jim O’Keefe, George Colling, Joe Wise, Bernie Mahowald and Mark Monnens. He will be laid to rest at St. Michael’s Cemetery, with fire department honors provided. Memorials are preferred and will be distributed in Bobby’s memory, by the family.

Born the middle son of three, Robert Dale was welcomed by parents Cecil and Vera (Colling) Mertens. He was born in the family cabin, on Spring Lake, on August 21, 1935. Bobby’s family later moved to Jordan, MN, where he and others often found mischief following them. Enjoying his roots in Spring Lake, Bobby rode his bike countless miles back and forth. He attended St. John’s Catholic School. During high school, Bobby worked for Strait Funeral Home, with graduating from Jordan High School in 1953.

While attending a dance at the Spring Lake Pavilion in high school, Bobby was introduced to a beautiful young gal named Carole Monnens. They became friends and started courting. On October 1, 1955 at St. Michael Catholic Church, in Prior Lake, Bobby and Carole wedded and later welcomed seven children.

Carole’s father built them their first home in Prior Lake. Her father had also started a successful lumber company, “Monnen’s Lumber Supply.” Bobby began working there and later took over the business. He was so proud of the positive effects it had on the community. Bobby was the first up town in the morning to welcome people on the streets. Through the years, his pickup was an iconic symbol making his way around town. He retired and passed on the business to his sons, but Bobby really could never retire. He continued to go to work, greeting his customers and assuring his son, he was running the business correctly!

Bobby was grained into the community and very civic minded. He was always looking for ways to benefit the community. Bobby developed and built the Prior South Community. He was instrumental implementing the Scott County 911 program. Bobby proudly served his community volunteering first for one year on the Jordan Fire Department and then for the Prior Lake Fire Department for 23 years, with 13 years as Chief.  He and Carole participated in the Prior Lake Players and they also were huge supporters of St. Michael Catholic Church and School.

From 1967 – 2014, Bobby and Carole raised their children and welcome grandchildren and great-grandchildren to their home on Prior Lake, in the Willows. Countless hours where spent as a family enjoying the summer and winter activities the lake provided. In 1993, Bob and Carole purchased a cabin in Cross Lake, MN, which also became a landmark for friends and family. Although Crosslake is only 150 miles from Prior Lake, Bobby said “it should never be traveled to in less than eight hours”. As a couple, they loved to travel, playing cards with the Credit River card group and entertaining. Bobby even dappled in deer hunting.

Bobby lived a simple life. He was committed to his family and community, by leading the fire department and being a local business owner. Bobby was honest, hardworking, loved to socialize with people and enjoyed watching Main Ave from the window of the Lumber Yard.

Ballard-Sunder Funeral and Cremation proudly served and cared for the Mertens family.

Offer Condolence for the family of Robert “Bobby” Mertens