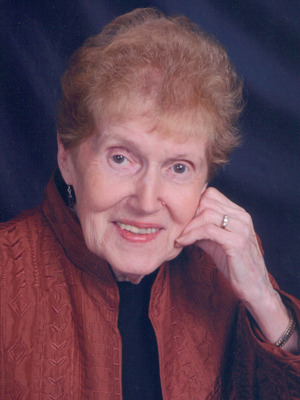 Rita Allmann, age 94, passed away peacefully on the morning of Monday, July 6, 2020, at her home in Jordan.

Rita was born in Jordan on April 28, 1926, to Michael and Lucy (Marxen) Stocker. She grew up on the family farm, together with her brothers Gerry and Tom. As a girl, she enjoyed the wildflowers she saw in the woods on the farm and on her walk down the Jordan hill to town.

She attended St. John’s parochial school and later Jordan High School. Following high school, she moved with friends to an apartment in Minneapolis and worked as a secretary for Northwestern National Life Insurance in the Loring Park area. While on a weekend visit back to Jordan, she was introduced to Hubert “Ozzie” Allmann, who had recently returned home from serving as a Captain in the Army in WWII. He would become her best friend, her husband, and the love of her life. They married in 1950, initially planning to live in Minneapolis where he was a teacher in the Mpls. Public School system. Instead, they resettled in Jordan to care for Hubert’s father, Sebastian “Seb” Allmann, and then stayed to raise their own children, Phil, Mary and Laurie.

As the kids grew up, Hubert continued to make the commute to Minneapolis, while Rita kept things rolling on the home front. She later took up secretarial work again, and was a friendly face in the counseling office at Jordan High School. For many years after, it was common for young people in passing cars to beep and wave when they saw her, calling “Hi Mrs. Allmann!”

She was very social but also was restored by solitude, and always loved her home. When her dear Hubert passed away too young in 1992, she never stopped missing him, but in time learned to manage. She was a wonderful and beloved friend, mother, grandmother, great-grandmother.

A lifelong reader, she was insightful and perceptive. She liked a laugh and was quick with a quip. She was a great cook and known for the cookies she generously shared: “Grandma cookies” were a brand all their own, more treasured than anything by Oreo or Pepperidge Farm.

She had an eye for beauty. She loved the wild birds, prairie grasses, and the way that leafless trees look in winter against the sky. She loved working with color, whether arranging a bouquet or designing a room, or choosing what to wear. She followed the news and was endlessly curious. Even to her last days, she had a remarkable memory and could tell detailed stories about dancing to the Big Bands, the many road trips that she and Ozzie took to “widen their horizons,” the parties where friends would gather around the piano after dinner to sing. Although many of her family members and closest friends passed before her, she often raised their names in conversation, saying, “Oh, we knew how to have fun.”

Her faith was a constant. Since she was a girl, her guardian angel was a presence in her life, as were daily prayers.

If she were here, she would say thank you for all the goodness that came her way, from her devoted friends, to relatives who stayed in touch with calls and letters, to the trusted carpenter and plumber who responded so kindly and quickly when things came up to ease her worries. She never took any of this for granted.

She accomplished so much. One of the things she did was to inspire her kids.

Years ago, when an ultrasound technician told her she had a beautiful heart, her family laughed and said, yes, we already knew that.

Private Family Mass of Christian burial will be held on Tuesday, July 14 at 11:00am at St. John the Baptist Catholic Church, Jordan. Friends may watch the live streamed Mass by going on to the Church’s website. Interment Calvary Cemetery, Jordan.

Offer Condolence for the family of Rita Allmann