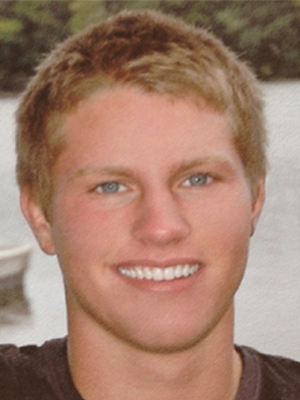 Rickey Hible, of Shakopee, passed away much too soon on April 16, 2016 at the young age of 22.  A gathering of family and friends will be held at Ballard-Sunder Funeral & Cremation in Shakopee on Tuesday, April 19, 2016 from 4:00 – 7:00 PM. A Celebration of Life Service will be held on Wednesday, April 20, 2016 at 11:00 AM with visitation one hour prior at Shepherd of the Lake Lutheran Church in Prior Lake.  Reverend Laila Barr will preside.  Pallbearers for Rickey are Tommy Malimanek, Gabe Loraas, Jordan Gunhus, Ryan Ebsen, Trevor Mulcrone, Dustin Bay, and Brandon Watt.

On July 12, 1993, Kara and Garry Hible were blessed with their handsome son, Rickey Alan Hible.  Kara and Garry had been fishing all day when Kara went into labor.  It was very appropriate that Rickey came into the world fishing, because it was a lifelong passion of his.  Rickey was the proud older brother to Tia, and he loved growing up with her.  They were practically inseparable; Kara was regularly asked if they were twins.

As a boy, Rickey was physically small, but he had a big personality and a strong presence.  Even as a little boy he had a strong determination that served him well.  Rickey was also very independent.  At just 10 years old he was known to spend the entire day out ice fishing by himself.  He had a hand-crank auger, a sled full of fishing equipment and a bucket full of perch he caught throughout the day.  That was all he needed to be happy.

Rickey spent the first 12 years of his life in Watertown, South Dakota where he enjoyed being close to family and spending time outside.  Rickey was extremely hard working, his first job was within his family’s grain bin business (Schafer Steel Construction).  This job allowed Rickey to travel the country, earn money for college and spend time with his family and friends.    When Rickey wasn’t working, you could find him hunting or fishing.  Rickey loved the outdoors and spent as much time as he could in nature.  He loved hunting geese, ducks and pheasants sometimes on his own, or with friends and family.  Even at 14 years old, Rickey was so dedicated that he’d wake up before 4:00 AM on his own to make sure all of his decoys were properly set.

When Rickey was in middle school, his family moved to Shakopee, Minnesota.  He quickly made many wonderful friends and got involved in local sports.  Rickey first played football and then one of his coaches suggested he try-out for the wrestling team.  Rickey had a natural talent and wrestled varsity from ninth grade until he graduated in 2012.

After high school, Rickey attended UW Stout where he was pursuing an engineering degree.  Rickey was a smart boy and a good student.  He recently purchased a fitness equipment business in Hastings with his dad.  Rickey planned to work with his dad after graduating.  He was using his engineering background to develop specialty equipment for their business.  Both Rickey and Garry looked forward to a time when they could work less and spend more time together hunting and fishing.

Rickey loved learning and always had new things he was interested in. He loved to share his passions with everyone and had the ability to inspire others to his beliefs.  When he believed in a cause, there was no stopping him.  Rickey was very passionate, determined and persuasive.  He liked eating and living healthy (except for the time he ate half his dad’s birthday cake).  He enjoyed eating raw and seeking the benefits of essential oils and organic living.

It was clear to everyone that Rickey was a special guy and was known for his infectious smile.  Rickey was opinionated, determined, motivating to others and adventurous creating many lasting memories for many!  He had so much love and life ahead of him.    Rickey will be deeply missed and remembered always by his father, Garry Hible; mother, Kara (Heiser) Hible; sister, Tia Hible; grandparents, Barb & Stan Schafer, Elaine & Bob Rommereim, Jerome & Pat Heiser; great-grandmother, Betty Carlson; several aunts, uncles & cousins; other loving relatives and many dear friends.  There to greet Rickey in Heaven is his grandpa, Garry Edward Hible, Sr.; grandpa, Mark Malimanek; great-grandmother, Ruth Hoffmann; his chocolate lab, Snickers.

Offer Condolence for the family of Rickey Hible