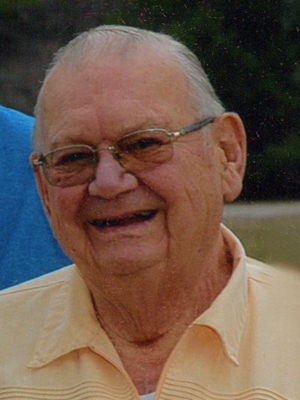 Richard (Rich) Hartman, of Jordan, passed away Monday, June 3, 2019 at the age of 90. A visitation will be held Thursday, June 6, 2019 from 4:00 – 7:00 PM at Ballard-Sunder Funeral & Cremation (104 First Street West) in Jordan. Mass of Christian Burial is Friday, June 7, 2019 at 11:00 AM with visitation one-hour prior at St. John the Baptist Catholic Church (313 Second Street East) in Jordan. Steven Dohmen, Shane Herman, Jacob Lucas, Tom Schepers, Brian Berger, Tucker Luskey, Krista Danner and Katen Hartman will act as urn bearers. Rich will be laid to rest at Calvary Cemetery with military honors provided by the Jordan Honor Guard.

On February 19, 1929, Richard Philip Hartman was born to Edward & Clara (Wick) Hartman. Rich loved growing up on the family farm in St. Benedict. He was just nine years old when his father passed away, so Rich quickly learned the importance of hard work. He was always so proud when his mother complimented him on his straight rows and his good crops.

In 1948, Rich enlisted in the United State Army. He served during the Korean War. He was stationed in Korea and received two Purple Hearts for his courageous service and injuries received in battle. Rich was honorably dicharged in 1952. While home on leave, Rich met Marjorie Huss, a young Union Hill girl, at a local barn dance. Love quickly blossomed. Rich and Margie were married on July 14, 1953, and they settled in Jordan to raise their family. The family enjoyed going to baseball games, swimming at Fish Lake and taking family drives on Sunday afternoons, followed by ice cream cones at Wey’s Webb gas station. The family took a yearly trip to a cabin in northern Minnesota and made so many wonderful memories. One of Rich & Margie’s fondest memories was a trip to Hawaii. They were also involved in the Polka Club of America, traveling around the state to dance in competitive events. The couple volunteered at St. John’s as religion teachers and were also members of the Ark of Yahweh prayer community. They strove to pass this strong faith in God on to their children.

When Margie passed away, Rich was heartbroken but managed to find happiness again. Rich and Ann met at a polka dance where a mutual friend introduced them. At first Ann thought Rich was too good to be true, but she quickly learned that he really was as wonderful as he seemed. Rich & Ann were married August 3, 1996. They embraced each other’s families and made a wonderful life together.

They enjoyed playing cards, dancing and cheering on the MN Twins. Rich could watch Gun Smoke and other westerns for hours on end. Rich & Ann also took many memorable road trips together with some of their favorite destinations being Texas, Arizona, Montana & the Grand Canyon.

Rich was always a hard worker. Throughout his life, he worked at the local creamery and feed mills. He ran the Corner Bar and the Hamburger Home Cafe. Rich also worked for Pekarna’s Meat Market. He had a long career in construction. He was a commercial builder for Kraus-Anderson. In retirement, Rich worked as a custodian at Jordan Elementary School, and all the students loved him!

When Rich truly retired, he had more time to spend with family and pursue his hobbies. He enjoyed bowling, going to Little Six Casino, watching old TV shows and baking. Rich was also a wonderful cook. Chili was his specialty, and he made a huge batch every Sunday. Throughout his life Rich was involved in many organizations: Knights of Columbus, American Legion, VFW, Disabled American Veterans, Honor Guard and Jordan Fire Department.

Six years ago, Rich & Ann moved into Brentwood Apartments. Rich had several health struggles, and in December, he began hospice. Rich received excellent care from his entire hospice team. On June 3, 2019, Rich passed away with Ann by his side.

Offer Condolence for the family of Rich Hartman