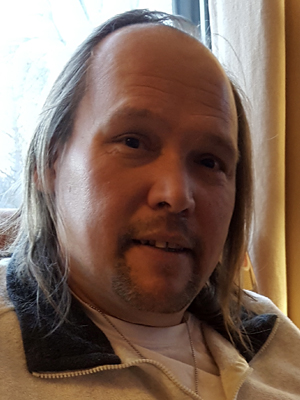 Jason was born on November 23, 1962 to Raymond Houle and Darlene Devereaux in Salt Lake City, Utah. Born in a Native American community, Jason lived many places growing up, including Browning, Montana and Turtle Mountain, where he was officially registered in the Turtle Mountain Band of Chippewa Indians. Jason was a momma’s boy, growing very close with his mother, Darlene, his whole life. He would do anything and everything for her.

Once he moved away from the reservation, Jason lived a mobile life, often living out of his car to save money and make ends meet. After some time, Jason discovered Jesus and his life would never be the same again. Instead of living for himself, Jason lived his life dedicated to God, serving others and making a lasting impact on everyone he met. One of those people was Roberta Carlson, who he met shortly after discovering his faith. On May 31st of 1997, they were united in marriage in St. Louis Park, MN. Together Jason and Roberta were blessed with two sons, Zach and Sam. Jason was always proud of his sons and their accomplishments. They enjoyed going to local flea markets as a family and finding all of the treasures (or junk) that they held.

Jason worked as a pressman for Imagine Printing for much of his career and enjoyed his time there, but it was truly just a way to provide stability for his family and build a platform for the true ministry he had a passion for. If he could, Jason would have given everything he owned to people in more need than himself. Countless times he could be found in grocery or convenience stores reconnecting with someone he knew or helped in the past, listening to their stories.

One ministry that Jason was particularly passionate about was bringing Jesus to Native people like himself. Even if they weren’t interested, he would help and support them any way he was able. He started the organization Native Strong ARC (Authentic Relationship with the Creator), leading household bible studies and spreading God’s good word. He was also involved with the “Birthday Party for Jesus” event, giving away presents to over 600 families in need.

Jason truly made an impact on everyone he served and connected with. Always helpful, honest, and loving, he will be greatly missed by his wife, Roberta Houle; sons, Zach and Sam Houle; mother, Darlene Stepaniak; father, Raymond Houle; siblings, Sonny Stepaniak, Leonard Florshinger, Dean Stepaniak, Conrad Houle, and Jack Sharpe; and many other nieces, nephews, family, and friends.

He is preceded by his brother, Royce Houle; and step-father, Larry Stepaniak.

Ballard-Sunder Funeral & Cremation is proud to serve and care for the Houle family.

Offer Condolence for the family of Reuben Jason “Casper” Houle