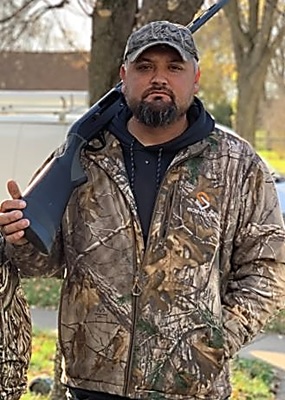 A public visitation will be held on Wednesday, July 13, from 4-7 pm at Ballard Sunder Funeral Home in Jordan MN (104 1st St west). Reed’s Mass of Christian Burial will be held on Thursday, July 14 at St. John the Baptist in Jordan (313 2nd St east) starting at 11am with a visitation prior from 10-10:45am. Following the Mass, interment will take place at Calvary Cemetery in Jordan.

On May 31, 1983, Reed was born to parents Reed Sr. and Tammie Poitra in Belcourt, ND. When Reed was brought home from the hospital, he was welcomed home by his older sister Seana. The Poitra Family moved to Jordan MN in 1997. Reed Graduated high school in Jordan MN, and attended Normandale College in 2002. But no matter where the family was living, Reed was always outside enjoying the great outdoors. In the Spring and Summertime, Reed could be found casting his line into one of his growing list of fishing spots. During the Fall and winter months, he spent his time sitting in hunting blinds, making turkey calls, posting up in a tree stand, or looking through a frozen hole in the lake just waiting for a fish to bite.

Reed was blessed to have three wonderful children; Kendra, Easton and Logan with his fiancé Holly. Reed’s entire world revolved around his children. He was protective of them and wanted them to have the best the world could offer. One of his greatest joys in life was getting the chance to teach Kendra how to use a bow and bringing her on hunting trips. Not only did it give him the chance to pass on his passions, but it also helped teach her about her family’s Native American heritage. Reed’s family is descended from the Turtle Mountain band of Chippewa Indians. He also shares Irish, French and German heritage passed down from his father. Reed was fiercely proud of heritage.

When he was done with school, his Uncle John offered him a job working as a flooring specialist. He spent many hours bonding and learning from his uncle in their shared trade. After a few years of working there, Reed opened his own business known locally as RP Flooring in Jordan.

Reed’s hobbies extended much greater than just the outdoors. Some of his many hobbies included working on project cars, smoking or grilling delicious meals for his family and friends and cheering on his Minnesota Vikings. On most Sundays you could find Reed in his garage, Vikings game on the TV, surrounded by friends and family with something on the grill and working on his beloved project truck.

Offer Condolence for the family of Reed Joseph Poitra Jr.