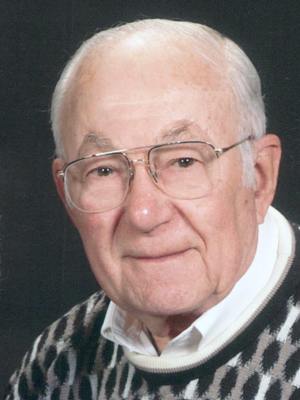 A time of gathering will be held for BOTH Quinten “Mike” and his beloved wife, Colleen on Thursday,    MAY 13, 2021 from 4-6pm with closing words at 6:00pm followed by military honors all at Ballard-Sunder Funeral and Cremation, 104 First Street West, Jordan.

Condolences and memories can be shared at www.BallardSunderFuneral.com and cards can be mailed to Mike’s family c/o: Ballard-Sunder Funeral & Cremation; 104 First Street West; Jordan, MN 55352.

Quinten Keith Hammer was born to parents, Peter & Leone (Hanefeld) Hammer on April 27, 1929.  He loved growing up in Odin with his sister LaVanne.  After graduating from high school, Quinten enlisted in the armed forces.  He proudly served his country in the United States Navy.  This is where he got the nickname “Mike” which stuck with him the rest of his life.

As a young man, Mike began dating a beautiful young woman from down the street, Colleen Grev.  They had known each other their whole life, because Mike was good friends with Colleen’s brother, and he had dated her two older sisters.  Quinten and Colleen knew very quickly that they had something special.  Their love blossomed, and they were married while Mike was home on leave from the Navy.  Colleen and Mike exchanged wedding vows at Zion Lutheran Church on July 25, 1953.

After Mike was discharged from the Navy, the Hammers moved back to Minnesota and started a family.  Colleen and Mike were blessed with a wonderful son, Kai.  They eventually settled on a beautiful piece of land in Jordan to raise their son.  Mike had the proverbial “green thumb”.  No matter what he stuck in the ground, it was going to grow and that turned the property into the beautiful setting it is today.  As a family, they took frequent trips back to Odin to visit extended family.  They also vacationed in Glenwood and enjoyed spending time with dear friends.

During his working years, Mike was a construction supervisor for the telephone company.  He was very intelligent and a hard worker.  In retirement, Colleen & Quinten had more time to travel.  They visited Europe and much of the United States.  They also spent a lot of time in Mesa, Arizona.  They wintered in Mesa for 19 years.  They made many friends and enjoyed the warm weather.  They even got to see Pastor Bob Bushaw preach sometimes.  This was extra special since Colleen & Mike were long-time members of St. Paul’s Lutheran Church.  Mike served on the church council for 16 years and was council president at one point.

Mike also had many hobbies.  He was a lifetime member of the American Legion and the VFW.  He was also a leader in the Boy Scouts and Cub Scouts for many years.  Mike was always so generous with his time and talents.  He was always ready to serve his community.  For Mike, the most important things in life were his family and faith. He was a dedicated husband, wonderful father and loving grandpa.

When Colleen died in May of 2020, Mike missed her dearly.  Their family takes comfort knowing that they have been reunited in Heaven.

Quinten was greeted in Heaven by the love of his life and wife of 67 years, Colleen Hammer; parents, Peter & Leone Hammer; step-father, Henry Syverson; sister, LaVanne and brother-in-law, Orville Hagman.

Quinten’s family would like to thank the staff at the Belle Plaine Lutheran Home and the Allina Hospice team for their wonderful care and compassion these past six months.

Offer Condolence for the family of Quinten “Mike” Hammer