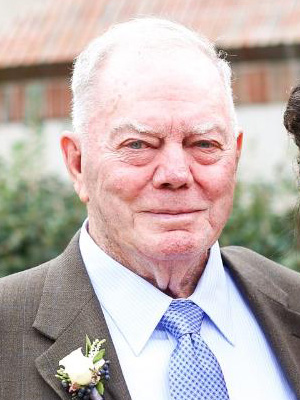 A visitation will be held on Monday, January 13, 2020 from 3-7 pm, at Ballard-Sunder Funeral and Cremation, 104 West First Street, Jordan and on Tuesday, January 14, 2020 from 10-10:45 am, followed by a Mass of Christian Burial, at 11 am, at St. John the Baptist Catholic Church, 313 Second Street East, Jordan. Father Neil Bakker will preside. Pete’s grandchildren will be the pall bearers. He will be laid to rest at St. John Calvary Cemetery, Jordan.

On the family farm in Sand Creek Township of rural Jordan, Peter Henry was born to Andrew Urban and Alvira Josephine (Breeggemann) Menke. He was the older brother to Marlin, Mary Lou, Jeanette, Ronald, John, Kathleen, Robert and Diane. Living on the farm, meant long hours and hard work. However, if you ask his siblings, Pete was never around when the work needed to be done!!!. All kidding aside, he attended St. John Catholic School through the Eighth Grade. Pete furthered his education for two years at Jordan High School, before returning home to assist on the dairy farm.

At the age of 19, Pete went to work for REA (now called Minnesota Valley Electric Cooperative.) He spent the next 42 years, dedicating his career as a lineman. Pete put in long hours and was always there to help customers, especially after storms and on trouble calls. Even after a long day at work, he remained true to his roots and still helped out on the farm. Upon retiring, Pete remained active cutting lawn at Ridges on Sand Creek Golf Course and driving vehicles for Wolf Motors, both in Jordan.

Pete met the love of his life, Judy Helen Zelenka, at an area dance hall. On June 3, 1961, at St. Wencelsaus Catholic Church, in New Prague, MN, they wedded. Pete and Judy spent their honeymoon fishing, one of his favorite past times. From this union, they were blessed with five children, Jeff, Sharon, Steve, Kevin and Larry. With Pete always working, he enjoyed coming home and staying there. Occasionally, the Menke family was fortunate to enjoy packing into the station wagon, for a one-day trip. In the later years, he became a grandpa. Pete adored his grandchildren and had a special relationship with each of them. As a couple, Pete and Judy enjoyed traveling to Branson, MO and Las Vegas, with friends.

Pete lived a simple life. He enjoyed playing cards, watching the Minnesota Twins and Vikings, and socializing with everyone at Clancy’s Bar and Pizza Parlor, in Jordan. Over the years, Pete liked ice fishing on Mille Lacs Lake and summer fishing on the area lakes. He enjoyed deer hunting and fishing with his longtime friend, Cliff Kersting and Larry Peters. Pete was an active member of St John’s Catholic Church and the Jordan Knights of Columbus. And to this day, he still had a close relationship with his siblings.

Pete Henry Menke had a positive attitude and a great sense of humor. He was very approachable and could carry on a conversation with a total stranger. Family was always important to Pete. The last several years, he devoted his time in caring for his bride, Judy.

Ballard-Sunder Funeral and Cremation proudly served and cared for the Menke family.

Offer Condolence for the family of Pete Menke