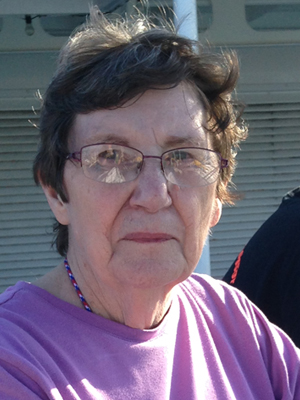 Paddy Vedeen, longtime resident of Prior Lake, passed away on Wednesday, May 8, 2019 at the age of 81. A visitation will be held Thursday, May 16, 2019 from 1:30-3:00PM with a celebration of her life starting at 3:00PM at Ballard-Sunder Funeral Home, Prior Lake. Pastor Dianna Hunsted will preside and Paddy’s daughter will act as an urnbearer.

On St. Patrick’s Day in 1938, parents Jesse and Vivian Kibbee celebrated the birth of their daughter, Paddy. She was the second of four children to be raised in Valier, Montana.

Following her high school graduation, Paddy moved to Minnesota where she began working with United Airlines. During this time, she was introduced by friends to a young man, Peter Vedeen. On September 3, 1961 they exchanged wedding vows in St. Paul.

Paddy and Peter settled in Prior Lake in 1965 and began their family. Being a mother was so important to Paddy—she was always supportive and loving! With Peter’s help, the family grew a large garden together and enjoyed the little moments of life.

When Peter was diagnosed with lung cancer, Paddy took on the responsibility of caring for him and raising the family. She was resilient during the toughest times. After Peter’s passing, Paddy began working outside the home. A natural caregiver, Paddy continued her education and received her LPN license. In 1985 she began working at the Edina Care Center. For nearly 18 years, she loved being a nurse.

After her retirement in 2003, Paddy began to travel. She visited friends and family throughout the United States. Retirement gave Paddy the opportunity to spend more time with her friends and family. She was a proud grandmother! Whether it was babysitting or going on a cruise with the grandchildren, Paddy took every chance she could to be with them.

A longtime resident of the Prior Lake condominiums, Paddy appreciated all her friends there. She loved getting together for coffee and socializing. During the summers, Paddy and her friends would go to garage sales. Even then, she had her family in mind. Paddy was sure to find outfits for her growing grandchildren.

Paddy was a generous, kind woman who was always looking out for others. She is loved and missed by her daughter, Marci Beske; grandchildren, Lauren Vedeen, Bryce and Carmen Beske; siblings, Betty Olson and Jim Kibbee; other loving relatives and friends.

She is greeted in Heaven by her husband, Peter; her son, Erick; brother, Frank Kibbee and her parents.

Offer Condolence for the family of Paddy Vedeen