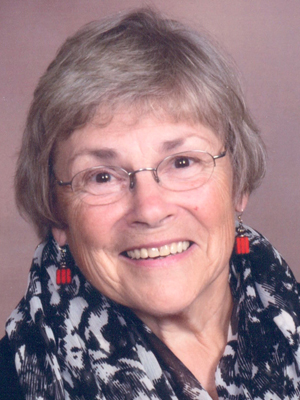 The world became a little less bright with the passing of Ottilie Prevost Castriotta, age 75, of Prior Lake, MN, on Friday, January 24, 2020.

A time of gathering will be held on Wednesday, January 29, from 4-7 pm, at Ballard-Sunder Funeral and Cremation, 4565 Pleasant Street SE, Prior Lake. A Celebration of Life will be held on Thursday, January 30 at 11 am, with an additional time of gathering one-hour prior, at Holy Trinity United Methodist Church 16150 Arcadia Avenue SE, Prior Lake. Pastor Chad Gilbertson will preside. In the Spring she will return home to be laid to rest with her parents at Oak Hill Cemetery in Southington, CT.

On January 9, 1945, in Bristol, CT, Otti was born to Louis and Dorothy (Allard) Prevost. She was the younger sister to Susan, growing up in Southington, CT, and spending summers at Acorn Lodge on Highland Lake in Winsted, CT. Otti loved all kinds of outdoor activities. As a teenager she translated her love of the outdoors to a summer job as a camp counselor. Otti graduated from Southington High School in 1962.

Otti earned a Bachelor of Science Degree in Nursing at Boston University in 1966. She began her career as a nurse in Boston.  When she moved to Minnesota she worked as a Med-Surg nurse at the new Burnsville Ridges Hospital.  She was exceptional nurse.  Later she transitioned to administration first as a nurse manager at Oxboro Clinic, and later with United Health Group working to accredit health plans, and in credentialing and utilization management.  In the 1990s, Otti went back to school and earned a Master of Arts degree in Health and Human Services Administration from St. Mary’s University in Minneapolis. Otti was generous in many ways, especially with her colleagues and friends.  She empowered others to lead, and to advance in their careers.  After retirement, she worked as a hostess at the Savage HyVee. Otti loved welcoming customers to the restaurant and made many wonderful friends with the young staff.

While playing on a Powder Puff Football Team, Otti was coached by a young man named Larry Castriotta. In July of 1966, they married at the Boston University Chapel. Otti and Larry had two daughters, Larissa and Rachel.  They often went back to the East Coast to visit family and friends.  Family road trips were a lot of fun. They also traveled all around the Midwest showing horses.  Otti visited 49 of the 50 states, missing only Hawaii in her life.  She also went to Japan, Denmark, Mexico, Canada, and China.

In the 1990s Otti rekindled her love of outdoor activities as an active member of the ULLR Ski, Bike and Social Club.  Otti also enjoyed bird watching, gardening, volunteering, and making music.  She was instrumental in establishing the Don Hartley Memorial Garden at Holy Trinity United Methodist Church.  She continued his legacy of donating fresh produce to the Community Action Partnership of Scott Carver and Dakota counties.  Otti also enjoyed playing the bells at church and participating in the many activities of the church with other members. Otti found great joy attending concerts, sporting events and family gatherings with her friend Harold Jensen. They had a matching twinkle in their eyes.

It is difficult to put into words Otti’s capacity for love and friendship.  Not only was she the best mother and grandmother, she was an exceptionally caring sister, aunt, mother-in-law, co-worker and friend.  She stayed connected with people around the world, and always made an effort to visit friends on her many travels.

Ballard-Sunder Funeral and Cremation proudly served and cared for the Castriotta and Kennedy families.

Offer Condolence for the family of Ottilie Prevost Castriotta