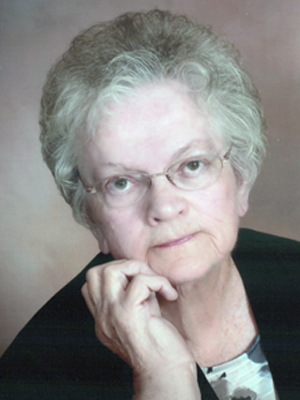 Nancy Lee Johnson, longtime resident of Prior Lake, passed away October 10, 2020 at the age of 80.

A funeral service will be held Saturday, October 17 at 11AM at St. Paul’s Lutheran Church, 5634 Luther Rd. SE, Prior Lake, MN with visitation beginning at 9:30AM. Nancy will be laid to rest at St. Paul’s Lutheran Cemetery. Acting as Nancy’s pallbearers are Jeff Dahl, Bryan Clemen, Scott Prady, Pat Remick, Dean Gustafson, and Gregg Boyson.

Nancy was born on November 6, 1939 in Lake City, MN to Reinhart and Helen (Betcher) Miller. Growing up on the family farm, Nancy was one of eleven children. She established her strong work ethic early by helping with many chores on the farm such as butchering chickens, all while being terrorized by her older brothers. Following her graduation in 1957, Nancy moved to Rochester with her sister and started a life of her own separate from the farm, working at the Telephone Company.

Around this time, Nancy met a serviceman named Arthur D. Johnson when she went with a friend of hers to meet her friend’s husband who introduced her to his buddy. They immediately made a special connection and the rest was history. They were married on March 2, 1963 at St. John’s Lutheran Church in Lake City. In the early 60s, they moved to Prior Lake to raise their family. During this time, Nancy worked various jobs to help support Donald as he worked during the day and attended Dunwoody Institute for Tool & Die pattern making at night. In the 70’s, she started a job with Control Data, later Seagate, for over 30 years.

After her husband’s sudden passing in 1977 Nancy’s role as a mother became even more important. She made her sons Scott and Greg the utmost priority in her life. She worked diligently to provide and support them. In later years, Nancy continued to show her love through food. If she knew you had a favorite dish, Nancy would make enough to eat for a week! She was a talented cook and baker and even took classes in order to learn how to make decorated cakes. She also enjoyed canning, sewing, attending farmer’s markets, garage sales and could not pass up a deal.

Strong-willed and honest, Nancy always spoke her mind and was known at times to use colorful language to get her point across. She was generous to a fault and cared deeply for those she loved. Nancy will be missed by her sons, Scott (Jill) Johnson of Eagan and Greg Johnson of Prior Lake; grandchildren, Hope Johnson and Greg Johnson Jr.; step grandchildren, Jessica Campbell and Kelly (Chuk) Rohrer; siblings, Leland Miller of Hager City, WI and Delaine (Donald) Klein of Lake City; other loving family and friends.

Offer Condolence for the family of Nancy Lee Johnson