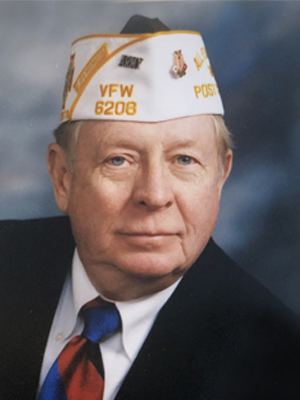 Myrl Mahaney, of Prior Lake, passed away April 3, 2021 at the age of 91. He was a proud Irish American who loved his family and the Lord.

A visitation will be held on Friday, April 23, 2021 from 4:00 – 6:00 PM at Ballard-Sunder Funeral & Cremation (4565 Pleasant St. SE) in Prior Lake. Mass of Christian Burial is Saturday, April 24, 2021 at 11:00 AM with visitation one-hour prior at St. Michael Catholic Church (16400 Duluth Ave SE) in Prior Lake. Father Tom Walker and Father Xavier Llango will preside. Family and friends can also stream the service at the following link: St. Michael’s Youtube.

Military Honors will be provided by the Prior Lake VFW Honor Guard. Michael, Shawn, Rob & Mark will act as urn bearers, and Myrl will be laid to rest at Fort Snelling National Cemetery.

On December 11, 1929, Willis & Violet (Everson) Mahaney celebrated the birth of their son, Willis Myrl Mahaney, Jr. Myrl spent his childhood in Aberdeen, SD. As a teenager, Myrl enjoyed working at the grocery store and restaurants his family owned. In 1948, Myrl graduated from Aberdeen High School.

Following graduation, Myrl Started at N.S.T.C. but took a detour after he was drafted into the United State Army. After basic Myrl was shipped off to Korea. Myrl proudly served his country during the Korean War. He then returned home to finish his degree at Northern State Teachers College in Aberdeen.

In college he was set up on a blind date with a lovely young woman, Nedra Larson. Myrl and Nedra were married in May of 1954 in her hometown of Northfield Mn. As newlyweds, they moved to Minnesota and started a family. They were blessed with four wonderful children, Michael, Shawn, Rob & Maureen.

As a family they enjoyed many camping trips. They loved meeting up with extended family in their matching campers. Myrl was also a baseball coach and Scout leader for his boys. Eventually Myrl and Nedra went their separate ways, but they always remained dedicated to their children.

Myrl was a hard-worker and always provided a good life for his family. Over the years he worked for Kresge, Red Owl and Supervalu. He eventually got a job with Dairy Queen International and worked his way up to being the Director of Purchasing. Through his work with Dairy Queen, he got to meet a lot of celebrities. Myrl even got Ann Margret to sign his cast when he had a broken arm.

When Myrl wasn’t working, he enjoyed camping, snowmobiling, boating, playing golf, bowling (he once bowled a perfect 300!) and spending time with his many friends, as Myrl was loved by many and liked by all.

Myrl also loved to travel and took many memorable trips. Some of his favorites were to China, Ireland and the Rocky mountains. He also owned a home in the Florida Keys with his son Michael that the family was able to enjoy for many years. Myrl was always involved in the community. He enjoyed caroling at Christmas time and hanging out at the local VFW. Myrl served as Post Commander and was active in the honor guard. He also ran the Monday night Meat Raffle with his good friends Jim Cates, Joe Wise and John Braunshausen for many years.

Myrl had many interests, but the most important things in his life were his family and faith. He loved spending time with his kids and grandkids. Myrl had a big heart. This allowed him to find true love in his 80’s. Myrl and Delores had been neighbors many years ago. When they reconnected, they began exchanging letters, phone calls and eventually made monthly trips between MN and OH so they could be together. Myrl’s family loved seeing how happy he and Delores were together. She was a true blessing in his life. He cherished his daily phone conversations with Delores and every night ended their call with a bedtime affirmation “goodnight pretty girl, I love you”.

After managing cancer for 14 years, Myrl was called home to Heaven just in time for Easter. This was very fitting for a man with Myrl’s deep faith. Myrl now lives on in the hearts of his family. He is survived by his children, Michael (Laurie) Mahaney, Shawn (Kathy) Mahaney, Rob (Kathie) Mahaney and Maureen (Mark) Hoodecheck; a multitude of grandkids, great-grandkids and great-great-grandkids; nieces and nephews; sisters, Gloria Prager and Joyce (George) Larson; girlfriend, Delores Klemp; other relatives and dear friends.

Offer Condolence for the family of Myrl Mahaney