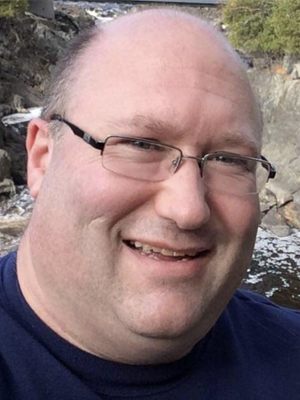 Michael D. Saville, of Shakopee, passed away suddenly at the age of 48.  He was a wonderful husband, father, son, brother & friend.

A visitation will be held Friday, February 15, 2019 from 4:00 – 7:00 PM with a Time of Sharing at 6:30 PM.  Celebration of Life Service is Saturday, February 16, 2019 at 11:00 AM with visitation one-hour prior.  All services will be held at Ballard-Sunder Funeral & Cremation (833 S. Marschall Road) in Shakopee. Pastor Jim Scheely will preside, Dan Feidt will deliver the eulogy and music will be provided by Dan & Karlene Feidt and Dave & Irene Gottwald.  Pallbearers for Mike will be Barry Ahlsten, Conzello Barnhill, John Burkard, Brandon Hoechst, Michael Huska, Michael Lindgren, Rich Orcutt and Al Purves.  Memorials are preferred and will be distributed by Mike’s family in his honor.

On March 15, 1970, Dwight & Carol (Koch) Saville celebrated the birth of their son. Michael Dwight Saville.  He was the oldest of five children and loved being a big brother to Tracy, Amy, Kristen and Loralie. Mike grew up on the Saville family farm in Braddock, ND. He developed a strong work ethic during his time on the tractor and working cattle. Mike loved his adventures (and had the scars to prove it). He enjoyed riding horses, snowmobiling, 3-wheelers, and figuring out how things worked – he even repaired an old car of his dad’s so it ran again. He was in many activities throughout high school that included 4-H, basketball, track and football.

After graduating from high school in 1988, Mike attended Westmar University in Iowa where he earned his bachelor’s degree in computer science. Mike was always a smart kid, but he reached his full potential in college. Mike graduated in 1992 and moved to Minneapolis to begin his long career with computers.

One Memorial Day weekend, Mike attended a party that changed his life. At the party, he met Dawn Burkard over a flaming pot of charred chicken. The two began chatting and hit it off immediately. Mike was persistent, and they fell in love quickly. They were married March 4, 1995 at the Calhoun Beach Club.

Mike and Dawn settled in Shakopee and took some time to focus on their careers. Over the years, Mike worked at Farmers Insurance, AMI Imaging and Allina. He led the imaging systems and document management as a Senior Program Analyst for Allina. Mike loved his work so much. In his spare time, he’d restore and build computers for family and friends.

After a few years of marriage, Mike got the best job of his life when he became a dad. Mike was on Cloud 9 when Alex arrived. He loved being a dad and was so proud of his little girl. With their family complete, Mike & Dawn centered their world around Alex. Mike encouraged her to try every sport and passed on his sense of adventure to his daughter. When Alex became involved in community theatre, Mike was right there to lend a helping hand. He started helping build sets and worked his way up to Vice President of the River Valley Theatre Company. Mike treasured the time he spent in community theatre with Alex

Dawn & Mike loved traveling and took many memorable trips. Some of their favorite destinations were the Solar Eclipse in Nebraska, Virgin Islands, Alaska, Jamaica and a Disney Cruise through the Caribbean. Mike also enjoyed all the time spent at Dawn’s family cabin.  In the winter it was a ski cabin in Michigan, and in the summer, they enjoyed water sports on Island Lake. Mike especially loved working on the “Big Boat” which he restored to perfect working condition this past summer.

Mike was a force of positive energy. He was talented in so many different areas and you could count on him for anything.  He was adventurous and fearless. Mike had the kindest heart and was a truly wonderful man. He loved his family deeply and lived his life to the fullest. On February 10, 2019, Mike suffered heart failure and passed away unexpectedly.

His legacy will live on in his family and all who loved him. Mike will be remembered always by his loving wife, Dawn Saville; daughter, Alex Saville; sisters, Tracy (Michael) Huska, Amy (Michael) Lindgren, Kristen (Conzello) Barnhill, Loralie (Brandon) Hoechst; in-laws, Bob & Edie Burkard; sister-in-law, Julie (Barry)Ahlsten; other loving relatives and many dear friends. Mike was greeted in Heaven by his parents.

Offer Condolence for the family of Michael D. Saville