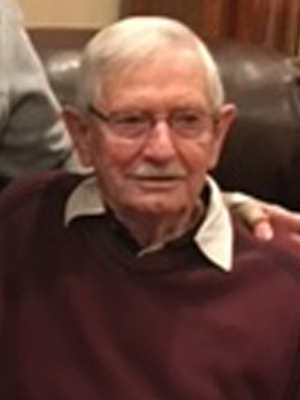 A celebration of life will be held on Friday, April 23, at 11 am, with a visitation from 9:30 – 10:45 am, at St. Paul’s Lutheran Church, 5634 Luther Road SE, Prior Lake. Pastor Greg DeMuth will preside, with Marvin’s grandchildren and great grandchildren acting as pallbearers. He will be laid to rest at St. Paul’s Cemetery. Memorials are preferred and will be distributed in Marvin’s memory by the family.

On December 6, 1930, on the family farm in Belle Plaine, MN, Marvin Henry was born to Emil and Ella (Holste) Gerdes. He was the seventh of eight children. Marvin grew up working hard in the fields and tending to the animals. He took a strong interest in tractors, which Marvin carried this love throughout his life. Farm life consumed most of Marvin’s time, but while in school he enjoyed playing basketball. Marvin graduated from Belle Plaine High School in 1948.

After graduating, the Gerdes family moved to Buffalo Lake, MN. Marvin continued to help on the farm, until drafted into the United States Army. He served during the Korean War and was stationed in Germany, from January 12, 1952 – December 15, 1953. Upon returning home from the service, Marvin worked many years performing two jobs. He worked at Floyd Johnson Cabinetry, also Poly Tech in Bloomington, MN, and several more years at Watson Store Fixtures in Farmington, MN. Most of his full-time career was spent as the general foreman in millwork for the Minneapolis School District. After 25 plus years with the school, Marvin retired in 1993.

Life was enriched for Marvin meeting a young gal named Donna Mae Klingberg. He was attending a card game at her house, where Donna helped him learn the game of Flume. The conversations began over the course of the next months and soon the love story started. On November 8, 1952, at Fort Snelling National Chapel, Marvin and Donna wedded. They settled down in Prior Lake and were blessed with four rambunctious boys, Dave, Kevin, Bruce, and Jeff. When Marvin wasn’t working, the family was able to enjoy the annual summer vacation in northern Minnesota. At the resort, they enjoyed swimming, fishing and just spending quality time together. Marvin and his family also were fortunate to even see the sights of Disney World in California, the terrain of the Grand Canyon and experience the wonders of Branson, MO.

Marvin and Donna headed south to Mesa, AZ, in a motorhome for a short vacation. This excursion led them to spending the next 31 years wintering in Mesa. Marvin and Donna eventually purchased a park model, living there up to six months a year. A bit competitive, Marvin loved playing croquet with the other residents. He also was the monitor at the park’s woodshop.

An extremely talented woodworker, Marvin took great pride and joy in all his work. He built cabinets, a couple family homes and a couple very special grandfather clocks with a good friend, and in his later years mastered the crafts of bowl making and intarsia. Family was always the most important in Marvin’s life. Marvin was such a proud grandpa and great grandpa. He was kind hearted, loving and was one of the nicest guys in the world.

Offer Condolence for the family of Marvin H. Gerdes