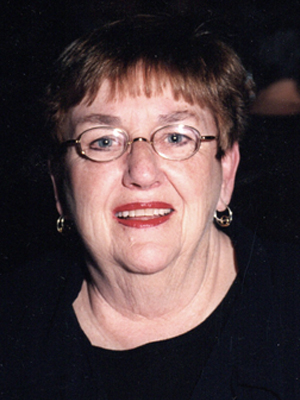 On November 1, 1935 Martha Lou was born to parents, Gustav and Matilda Paulsen in Laurel, Nebraska. She was the youngest of seven children to be raised on the family’s farm.

Following her high school graduation, Lou attended nursing school in Sioux City, Iowa. While at a college party in Iowa City, Lou caught the eye of a young man, Richard “Dick” Murphy. Despite Dick repeatedly saying her name wrong on their first date, the two hit it off. They exchanged wedding vows on May 6, 1961 at St. Thomas the Apostle Catholic Church, in Southwest Minneapolis.

Much of Lou’s free time was spent volunteering. A member of the Ladies Auxiliary, she helped with events at the Prior Lake VFW. Lou assisted in blood drives at St. Michaels and Scott County’s mobile health clinics. In 2016, she received national recognition for her work with Scott County. Lou was one of four recipients awarded the National Medical Reserve Corp Outstanding Public Health Volunteer Award. Lou was truly selfless. She had a servant’s heart and often asked others, “what do you need,” or “how can I help you?”

Lou cared greatly for her family. She was her children’s biggest supporter. She attended all their sporting events and volunteered at their school. When Dick began coaching tee-ball, Lou was there to assist—often arriving after work in her nursing uniform. In the summers, the family spent countless hours at their cabin on Big Bass Lake. In 2002, Lou and Richard sold the cabin and they retired in Prior Lake. This gave Lou the opportunity to spend more time with her grandchildren. Just as she did with her own children, Lou attended every school event.

Recently, Lou had begun to text. Her family loved receiving her daily morning text—it was sure to include a teasing remark or two. Lou’s kindness extended beyond her family. She was a friend to everyone. Whether it was Mystic Lake or the VFW, Lou greeted her friends with smile, a laugh or a smart aleck comment. Lou was grateful for her neighbors at Creekside Commons.

Offer Condolence for the family of Martha “Lou” Murphy