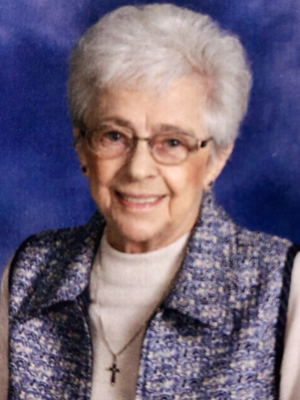 Marlys Christine Mackenthun Meyers, age 84 of Savage, MN, entered eternal life on Friday, November 6, 2020. A funeral service will be held on Saturday, November 14, 2020 at 11AM with a visitation 1-hour prior at Holy Cross Lutheran Church, 14085 Pike Lake Trail NE, Prior Lake, MN. Marlys will be laid to rest at Fort Snelling National Cemetery. Reverend James Jobst will preside.

On December 1, 1935, Marlys was born to parents Herb and Christine (Bathen) Mackenthun in Glencoe, MN. She was baptized into the Christian faith on December 15, 1935 and confirmed on April 10, 1949 at First Evangelical Lutheran Church in Glencoe, MN.

On May 5, 1979, Marlys exchanged wedding vows with Warren Meyers in Richfield, MN. They were blessed with 28 years together. They lived in Richfield before moving to Savage, MN in 1994.

Marlys graduated in 1953 from Glencoe High School and continued her education at Concordia College in St. Paul, MN. She later taught school in Texas and Minnesota for five years before entering the business world and working in the insurance industry. Marlys spent over 30 years employed with Satellite Industries.

After retiring, Marlys began to volunteer at the Bethesda Thrift Store. She dedicated over 20 years at Bethesda doing the Greeting Card Section. She received a 2,500-hour badge for her weekly commitment at Bethesda. She had to stop volunteering in March of this year due to the Covid-19 pandemic. For several years, Marlys also served as church Treasurer while a member of Holy Cross Lutheran Church.

Offer Condolence for the family of Marlys M. Meyers