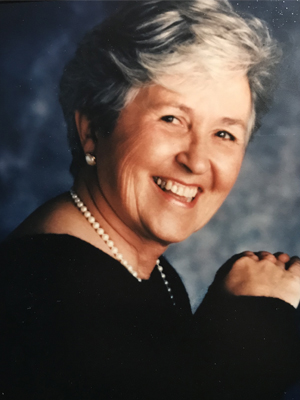 Marilyn R. Vallez, age 89 of Prior Lake, passed away peacefully in her home on September 12, 2019.  On February 6, 1930 in Bay City, Michigan, parents Bernard and Ruth (Lamoreaux) Ward celebrated the birth of their daughter, the youngest of four children.

In her youth, Marilyn enjoyed ballet and music and would often attend the opera with her parents. She also shared many fond memories of her long summers at the family Linwood cottage on Lake Huron. During her high school years, Marilyn had eyes for the star football player, Jim Vallez. After courting for four years, the young couple exchanged wedding vows at St. Joseph’s Catholic Church in Bay City, MI on Sept 23, 1950, and shared their lives until Jim’s passing in 1995.

During their early years, they lived in Alabama and Connecticut, and finally settling in Minneapolis in 1953 with two young children. They continued to grow their family and in 1971 built their country dream home on Marschall Road in Spring Lake Township. They loved to entertain, and Marilyn excelled in her cooking skills. Some favorite family vacation spots for the Vallez gang were Waverly, MN, Naples, FL, and Ely, MN.  While Jim was often seen as the adventurous half, Marilyn took her solo flight to be his partner in the air. She enjoyed scuba diving, skiing, and fishing adventures, but her first loves were her faith and her family. Marilyn volunteered in many ways in her community, took in children and guests from around the world, and was very politically active.

The funeral mass will be held on Monday, September 16, 2019 at 11AM with a visitation beginning at 9:30 AM, all at St. Michael Catholic Church, Prior Lake.  Father Tom Walker will preside. Marilyn will be laid to rest at Lakewood Cemetery in a private burial.  Memorials preferred to Sharing and Caring Hands. Website: sharingandcaringhands.org.

Offer Condolence for the family of Marilyn R. Vallez