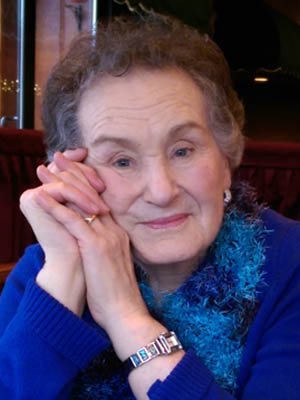 Marjorie Undesser,92 peacefully passed into eternity on April 27, 2019 to join her husband of 72 years, Donald Undesser. A gathering of family and friends will be held on Thursday, May 2, 2019 from 4:00 – 7:00 PM at Ballard-Sunder Funeral & Cremation (104 First Street West) in Jordan. Mass of Christian Burial is Friday, May 3, 2019 at 11:00 AM with visitation one-hour prior at St. John the Baptist Catholic Church (313 Second Street East) in Jordan. Father Neil Bakker will preside, and Marge’s grandchildren will act as urn bearers, gift bearers and eulogist. Marge will be laid to rest at Calvary Cemetery in Jordan.

She was the first-born to Anthony J. and Barbara E. Schweitzer on June 22, 1926 in Hague, North Dakota. At an early age, the family moved to Buffalo Springs, South Dakota. At age 5, they moved to Jordan, Minnesota where she remained for the rest of her life.

Marge was enrolled at St. John’s Parochial School and completed eighth grade in 1939. She entered Jordan High School and graduated in 1943 with a class of 31 students. At the age of 16 at a school dance, she met Donald. They were married at St. John the Baptist Catholic Church on May 18, 1946.

Marge held a deep faith in Christ Our Lord. She was a dedicated member of St. John the Baptist Catholic Church in Jordan and volunteered many hours at her beloved church. Marge passed on her strong faith to her family.

Marge’s greatest job of all was motherhood – raising seven children. Later on in life, spending time with her grandchildren and great-grandchildren brought her much joy.

Marge enjoyed traveling and spent many winters in the Florida panhandle. A few of her other interests were knitting, playing cards, gardening, golf, crafts, cooking, boating and fishing.

She was a hard-working wife, loving mother, wonderful grandmother & great-grandmother and a loyal friend. Marge was an inspiration to her entire family, and she will be deeply missed by all who loved her.

Offer Condolence for the family of Marjorie “Marge” Undesser