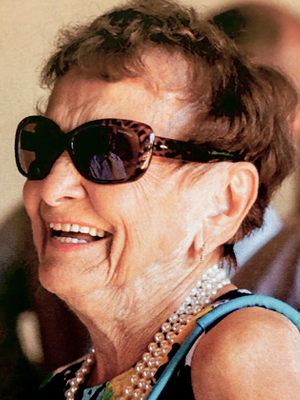 Mac “Rita” Driscoll of Prior Lake, formerly of Richfield, peacefully entered eternal life on July 21, 2021, at the age of 93.

She was born in Gary, South Dakota on December 20, 1927, to parents Thomas and Clara (Meyer) McLain and was the youngest of five siblings. She graduated from Gary High School in 1945 and moved to the Twin Cities to pursue a degree from the Minnesota School of Business.

Shortly after her schooling Mac met the love of her life, Patrick Driscoll, at her church’s softball league. They were united in marriage on June 14, 1952, at St. Stephen’s Catholic Church. Together they were blessed with five beautiful children, including one with intellectual disabilities. Despite facing several hardships, such as the early death of her husband, Mac lived her life with deep Catholic faith, compassion, a quick wit, and an undeniable sense of humor. She also had an unflappable drive to make the world a better place, especially for the underserved and those with disabilities.

While raising her children and working as an Accounts Payable Manager at Edina Realty, she was also a committed volunteer with Lutheran Social Services, Fraser, and The Arc of Minnesota. She played an instrumental role in creating dignified living experiences for the developmentally delayed through the establishment of local group homes. Mac’s dedication to service, faith, and justice never wavered.

Wherever Mac went she had fun. She had an undeniable energy that people were drawn to. She was close with her in-laws, her neighbors in Richfield, and later the community at Lakefront Plaza in Prior Lake. She was affectionately known as “Grandma Mac” by all, even her co-workers at Mystic Lake. Mac made everyone feel like they were part of her family.

Mac loved being a wife, mother, grandmother, and especially a great grandmother. Her family cherished her stories, her infectious laughter, and her cooking! Mac loved hosting meals for friends and family. Her idea of a great night was a glass of wine and a good conversation. Mac was an avid reader and loved to be physically active, enjoying sports like skiing and golfing. She even maintained her routine of Pilates, weights, and daily “hikes” into her 90’s!

Mac is now reunited in Heaven with her husband, Patrick Driscoll; siblings, Katherine, Mary, Betty, and John along with many other friends and family.

Mass of Christian Burial will be held on Tuesday, August 10th at 11:00 AM with a visitation one-hour prior at St. Michael Catholic Church in Prior Lake. Mac will be laid to rest at Fort Snelling National Cemetery (date to be determined). Father Tom Walker will preside, and Mac’s urn bearer will be her great-grandson, Jackson Preece. Family and friends who are unable to attend in-person are invited to stream the service through the following link: St. Michael’s YouTube.

In lieu of flowers, memorials are preferred and will be distributed by the family in Mac’s memory.

Offer Condolence for the family of Mac “Rita” Driscoll